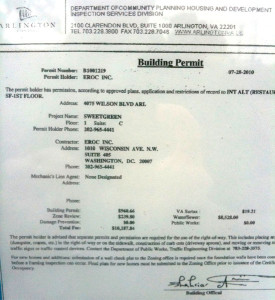 Salad-and-froyo joint Sweetgreen is coming to Ballston as soon as next month. And one of our spies has spotted the future restaurant’s building permit.

According to the permit, the new Sweetgreen will be located in 4075 Wilson Boulevard, a stone’s throw away from Ballston Common Mall and the same building in which Rustico will be opening soon.

Going forward, it will be interesting to see if north Arlington has enough of a froyo appetite to support Red Mango, TangySweet and Sweetgreen.

Update at 11:40 a.m. — Sweetgreen’s Phil Moldavski tells us that the store will open at some point this fall, after the company’s Reston store opens.

Why Ballston, we asked?

“We really love the Ballston neighborhood,” Moldavski wrote. “It has [lots] of young professionals and other like-minded people who are likely to appreciate what Sweetgreen is all about… we are excited to be coming there.”

Moldavski says the Ballston Sweetgreen will be similar in design to their current stores.

Thanks to “A Sweetgreen Cobb Salad Addict” for the tip.