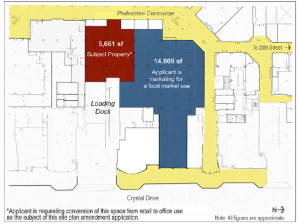 It’s a rather unglamorous item on Saturday’s county board agenda, but behind the mundane particulars of a site plan amendment to turn retail space into office space is an issue near and dear to the hearts of many Crystal City residents: the potential for a neighborhood grocery store.

The firm that operates the underground shops at 2100 Crystal Drive wants to take 5,661 square feet of open retail space and convert it to office and storage use. But that would come at the expense of a vacant 17,919 square foot space that, until 2005, housed a Safeway store. The landlord has been trying to find another grocery tenant, but has been fighting a strong headwind caused by the weak national economy and the imminent departure of 13,000 jobs from the Crystal City area.

Essentially, the request to convert vacant space to an office use is a white flag — an admission that after five years of trying to market the space to grocery stores, leasing agents have come to the conclusion that no one wants to run a 17,919 square foot grocery store in the Crystal City underground at this time. While keeping open the possibility of a smaller, Trader Joe’s-sized market, the landlord is trying to find a way — any way — to productively fill some of the excess space. 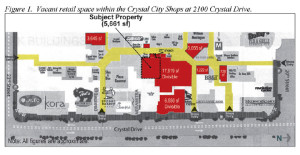 But the county board may not allow that to happen. County staff is recommending that the site plan amendment be denied and that the space remain open for a potential grocery store. While acknowledging the difficulty in finding a suitable tenant, staff argues that it’s important to “retain the potential for a use that would activate the public realm and/or have a higher value to the community.”

County staff concludes that the space should be retained for retail or for “civic and culturally-oriented uses.” Besides, staff notes, BRAC will leave plenty of vacant office space for the landlord’s potential 5,661 square foot tenant.

The board is expected to take up the matter on Saturday. Then, on Tuesday, an item with far wider-reaching consequences will be considered: the 40-year Crystal City Sector Plan.

END_OF_DOCUMENT_TOKEN_TO_BE_REPLACED

More Stories
Is North Quincy and 9th Street a Dangerous Intersection?Help Us Thank Our Awesome Advertisers