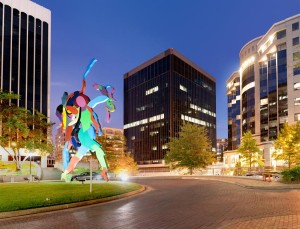 (Updated at 2:00 p.m.) If you manage a 40-year-old office building in Rosslyn, what do you when your sole office tenant — the Department of Defense — packs up and moves most of its offices to Ft. Belvoir (and elsewhere)?

That’s the plan announced by real estate firm Penzance earlier this week for its 17-story office tower at 1500 Wilson Boulevard. Most of the building, minus ground-level retailers like Santa Fe Cafe and a couple of lower floors, will be vacated next year thanks to the Base Realignment and Closure Act, and Penzance is planning to spruce things up.

“Future improvements will include the renovation of the building’s main entrance, main lobby, elevator lobbies, restrooms, elevator cabs and mechanical systems, as well as HVAC improvements,” the company said in a press release.

“1500 Wilson is coming to the market at the right moment and with the added benefit of a multi-million dollar renovation,” said Penzance executive Matt Pacinelli. “We are offering one of the only large blocks of space available in Rosslyn, and at a significant discount to the market rents typically seen in the newer towers.”

Penzance is also trying to talk up the 200,000 square feet of office space by describing the benefits of a Rosslyn address.

“Prominently situated at the intersection of Wilson and Clarendon Boulevards, the 249,000 square-foot building serves as a gateway to the Rosslyn-Ballston Corridor and features stunning panoramic views from its 17-story vantage point,” the company said.