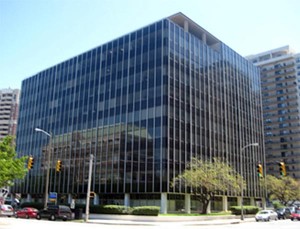 The building’s current tenant, the Department of Defense, will be moving out in December as a result of the Base Realignment and Closure Act (BRAC). In anticipation, the building’s owner is embarking on a major renovation project to “re-position” the 1960s-era building for occupancy by a new tenant.

“The building… will be fully renovated, with a new lobby, landscaping, façade improvements, fitness center, updated common areas, updated HVAC and fire and life safety systems, and a roof deck with extensive views,” according to a press release. “We see a unique opportunity to deliver a fully refreshed, high quality work environment at a price point substantially lower than the new buildings being delivered in the Rosslyn-Ballston corridor.”

To fund the $5 million renovation project and the leasing efforts, owner RESI Management has raised $21.2 million from Chevy Chase-based Federal Capital Partners, along with a $33.5 million loan from Wells Fargo. The renovations are expected to be complete by mid-2013.

The 184,216 square foot building first opened in 1966. Located two blocks from the Ballston Metro station, the building has been serving as the headquarters for Department of Defense Education Activity, which manages  schools for military children.