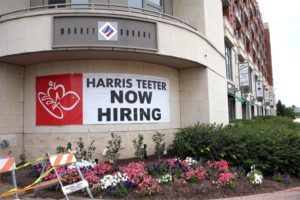 The Harris Teeter store near Potomac Yard, which has been closed since May 2012 after being flooded with raw sewage, will hold its grand reopening in two weeks.

The store, at 3600 S. Glebe Road, will hold a ribbon cutting ceremony at 8:00 a.m. on Wednesday, Oct. 23. Events will also be held that weekend in honor of the reopening.

The store will be open 24 hours a day, seven days a week.

From a Harris Teeter press release:

In each of its stores, including its location at Potomac Yard, Harris Teeter considered sustainable building design throughout its re-design process. The refrigerated cases will feature motion detection lighting; the company will also install doors with LED lights on the refrigerated cases as well as LED spotlighting throughout the store to reduce energy consumption. Harris Teeter originally installed both an energy management lighting system and a heat reclamation system in this store and will continue to utilize these technologies to reduce energy waste.

Harris Teeter’s insurers are currently suing Arlington County for more than $1 million to recover losses caused by the sewage backup.