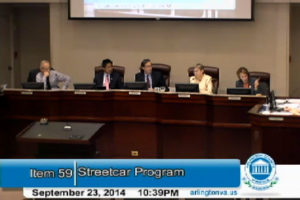 A significant milestone has been reached for the Columbia Pike and Crystal City streetcar — the county has approved an engineering and design contract for the 7.4-mile system.

Last night, after a two-hour discussion, the Arlington County Board voted 3-2 to approve a contract with HDR Engineering for $26 million for preliminary design and engineering work on the project. Fairfax County has committed to paying $3.2 million of the contract for their segment of the streetcar, from Bailey’s Crossroads to the Skyline neighborhood. The $26 million is 5.4 percent of the projected $481 million streetcar project.

“I believe that this decision is a major milestone to keeping us on track to start streetcar service in 2020,” County Board Chair Jay Fisette said at the meeting. “We think long-term. We make long-term decisions, we don’t think just about the next month or next election. We created a Columbia Pike plan over many years. Think about the Clarendon Sector Plan or the Rosslyn Sector Plan. How would you feel if you went through those years and years of meetings and then have someone change that plan? I think we need to have some integrity and recognize the engagement that we’ve had.”

HDR is the firm that designed the streetcar in the District’s H Street NE corridor, but has also designed streetcar or lightrail systems in New Orleans, Phoenix and is designing a 122-mile rail system in Denver, Colo. As part of the contract, there’s a $5 million clause for “optional work,” which includes helping the county with deciding how to actually construct the streetcar. The preliminary engineering and design is expected to take 18 months.

According to the staff presentation, the contract stipulated HDR provide:

Thirteen speakers addressed the County Board on the issue — 11 in favor, and two opposed — a somewhat muted turnout considering the divide the streetcar has generated in the Arlington community.

“We have waited for a very long time for this project,” said Juliet Hiznay, an Arlington Heights resident. “It occurs to me that sometimes one of the worst things government can do is delay decisions. I think we’ve seen that play out on the school side with the lack of comprehensive planning, and we’re really paying for it now.”

David DeCamp, a real estate developer and former Arlington Chamber of Commerce chairman, spoke in favor of the streetcar, saying it will fund future investments in schools and will be “great for all of Arlington.”

“Frankly,” he said, “it’s something that’s been promised to the developers who have built three or four beautiful properties on the Pike so far.”

Penrose resident Stefanie Pryor opposes the streetcar, but in acknowledging that it was likely to pass, said she hoped for an auditor to be included in the contract and direct stipulations to ensure the materials and cars used for the project are appropriate and functional.

“You get some nasty surprises with commercial off-the-shelf [vehicles] unless you put it explicitly in the contract,” she said.

Board members John Vihstadt and Libby Garvey, elected largely on platforms opposing the streetcar, both railed against the contract and the streetcar in general, with Garvey positing that the streetcar system would move fewer people and deliver a worse return on investment than an enhanced bus system.

“I would maintain that we are plunging ahead on something we are not really ready for that I don’t think is really justified,” she said. “We are spending all this time and effort and money on seven and a half miles of tracks and wires that can take us to where we can go now, but slower.”

Vihstadt criticized the speed with which the process has taken place; since his election in April, the County Board approved its 2015-2024 Capital Improvement Program, which included all of the funding for the streetcar, and now the first dedicated funding for designing the system. Vihstadt is facing challenger Alan Howze — a streetcar supporter — in the Nov. 4 general election after defeating Howze in April.

“The Board majority is playing that old quiz show game ‘Beat the Clock’ in trying to rush the signing of various streetcar contracts and agreements before the streetcar’s low popularity sinks even further, and before the Nov. 4 county board election,” he said. hey want feed the narrative that the streetcar is a ‘done deal’ and that it is too late to turn back… this 7.4-mile project with a cost of $500,000,000 is a long way from being a done deal. In fact, it’s still in the mixing bowl and not yet in the oven, let alone baked.”

In response to the vote, Alan Howze issued a statement lambasting Vihstadt for trying to divide the community with the streetcar as a wedge.

“Rather than use the streetcar to score political points like my opponent, we must ensure that the design and engineering plan responds to community questions and creates a functional and cost effective solution,” he said in the statement. “I look forward to closely monitoring ongoing developments to make certain the design and engineering plan is responsible, accountable and includes community input throughout the process. The streetcar is a once-in-a-generation investment that will have a positive effect on our community for decades to come.”

Earlier in the meeting, the County Board unanimously approved a $5.6 million contract for design of the Columbia Pike Multimodal Project, which includes street improvements to accommodate transit stations to serve buses and the streetcar, as well as pedestrian improvements and traffic mitigation.

The improvements include moving utility lines underground, widening sidewalk, increasing on-street parking, building left turn lanes at four intersections and improving the sewer infrastructure to accommodate future development. The last two segments — the first of the three-part, $76 million project is already complete between S. Oakland and Garfield Streets — are expected to be complete by 2019.