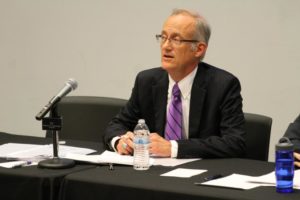 If you voted for Vihstadt, which of the following, if any, was foremost in your mind in the voting booth?