You’ve waited patiently for this post, and here it is, just hours before 2014 comes to a close and a new year of local developments is ushered in. (Those of you who receive our email newsletter may be seeing this on Jan. 1, in which case feel free to ignore this pointless introduction.) 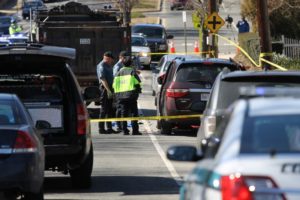 5. Woman Dies After Being Struck By Dump Truck (29,711 views) — It was a nightmare come to life, and it happened right in front of a local elementary school. On a cold February day, 39-year-old Jennifer Lawson was struck by a truck as she loaded one of her young children in her minivan, which was parked on N. Little Falls Road in front of Nottingham Elementary. Lawson died at the hospital, leaving behind a husband and three children.

A memorial fund was established for the family, and the incident helped to bring about additional safety changes on Little Falls Road. Despite those changes, nine months later another mother was struck while loading her kids into an SUV, just one block from the original accident.

4. Man Convicted of Assault on Roommate Who Drew a Penis on His Face (46,278 views) — It should come as little surprise that the follow-up to our No. 1 most-viewed article of 2013 would itself subsequently rank in the top 5. James Watson, a 30-something Lyon Village resident, was found guilty in May of the crime that earned him international attention — beating the snot out of a roommate who drew a dong on his face while he was snoozing. It was, of course, the mugshot — in which you can see the artwork — that turned this from a run-of-the-mill crime report item to an accidental internet sensation.

Watson was fined but the judge did not order any additional jail time. A quote from the prosecutor in the case suggests the time Watson served after his arrest might have been punishment enough. “He was an object of ridicule in jail that weekend because he still had the penis drawn on his face,” the prosecutor told us. 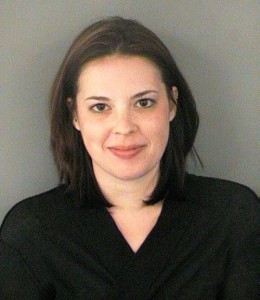 3. Police: Drunk Woman Shows Up Naked to Visit Husband in Jail (57,215 views) — Speaking of the Arlington County Detention Facility and accidental internet fame, a Reston resident became an overnight meme in March when she allegedly showed up naked at the Arlington magistrate’s office following a Clarendon bar crawl. Maura Fussell was there to visit her husband, who also had a bit too much to drink at the bar crawl and had earlier been granted a room in the jail. Why she reportedly lacked clothing is still unknown to us.

Fussell pleaded guilty to a misdemeanor drunk in public charge in May, paying a small fine but avoiding jail time. A separate misdemeanor trespassing charge, amended down from indecent exposure, is still pending, according to court records.

2. Bar Crawl Attendee Strips Naked, Leads Police on High Speed Chase (85,876 views) — Another Clarendon bar crawl, another high-profile arrest. This time, 22-year-old Charles Mack stripped naked during June’s “All-American Bar Crawl,” then hopped in a car and led police on a brief but exceedingly dangerous chase around the neighborhood. He finally ran into a couple of cars, then was tased and taken into custody after he hopped out of the car and tried to flee on foot — all that while still naked and in front of dozens of revelers.

In September Mack pleaded guilty to driving under the influence of drugs and felony eluding, via an Alford plea. On Dec. 12 he was sentenced to three months in prison, followed by three years of probation and a $1,500 fine. 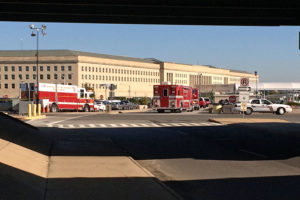 1. Ebola Scare at the Pentagon (123,960 views) — On Oct. 17, ARLnow.com was the first to break the story that a woman suspected of having Ebola was taken to the hospital from the Pentagon south parking lot. In the midst of a national Ebola panic, this story of course quickly went viral and was picked up by the Associated Press, television networks and nearly every other national news outlet in the nation. It is our most-viewed article of all time.

ARLnow.com first became aware of this story when a hazmat team was dispatched to the Pentagon for a “sick person” call. It’s common for medics to respond to those feeling ill in Arlington. It’s not common for the county’s hazmat team and medical director to respond. A Pentagon City-based ARLnow.com editor donned some jogging gear and ran over to the Pentagon, snapping a couple of cell phone photos of the incident response. We decided to avoid showing up with professional photo equipment — last time an ARLnow.com reporter did that, during the 2010 Pentagon shooting, the reporter was threatened and almost arrested.

Given that any use of the word “Ebola” would instantly become national news, we held the story until we received enough confirmation to feel very comfortable running it. A spokesman for the Pentagon Force Protection Agency soon confirmed that a woman who said she recently arrived from Africa was sick and vomiting, and that the hazmat team was called out of “a complete abundance of caution.” Though the spokesman never said “Ebola,” it was clear what was happening, from the description of Ebola-like symptoms to the fact that much of the parking lot was cordoned off with police tape.

Luckily, this story had a relatively happy ending. The woman did not have Ebola, and no first responders were infected. In fact, the woman had not even traveled to Africa, like she initially had claimed. Why she told the story she did is still unclear.

In a subsequent article, ARLnow.com exclusively revealed that Virginia Hospital Center had turned away the Ebola patient, sending them to Fairfax Inova Hospital instead, which led to something of a mini-controversy. VHC didn’t respond to our questions the day of the article. The next day, they issued a statement claiming that the patient was turned away due to construction in the hospital’s biocontainment area. First responders we talked to off the record weren’t happy with VHC’s decision, and they didn’t quite buy the hospital’s explanation. Still, it’s yet to be seen whether anonymous tipster’s claim that the hospital’s decision was at least partially business-motivated is true or not.

END_OF_DOCUMENT_TOKEN_TO_BE_REPLACED

More Stories
NOVA Legal Beat: Do I Have to Get a Second Opinion to Take Medical Leave?Peter’s Take: What Arlington Should Do in 2015