It was a momentous year for Arlington, as demonstrated by the second of our three “Top Stories of 2014” posts.

Perhaps the biggest Arlington story of the year, in terms of local policy significance, came in at No. 6 on our list (which ranks the most-read articles of 2014). The year’s only homicide in Arlington County also made this list. 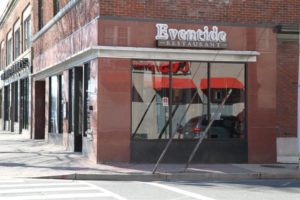 10. Eventide Restaurant Closes in Clarendon (16,098 views) — Whenever a restaurant opens or closes in Arlington, it’s almost always a big story for us in terms of readership. Restaurants help to give neighborhoods character, serve as a gathering place and are a tangible part of the community. Losing a well-known and well-liked restaurant like Eventide hits home for many people. While this article had more readers, a follow-up article announcing Don Tito, Eventide’s successor, received more comments.

9. Westover Deaths the Result of a Murder-Suicide, Police Say (19,553 views) — The sad story of 31-year-old Kristy Flowers, a Westover resident with a promising future, pulled on the heartstrings of many readers earlier this month. Police say Flowers was murdered by her live-in boyfriend, Ray Savoy, Jr., who then turned the gun on himself. They were a seemingly happy couple in photos posted to Facebook just weeks before the shooting, making the shooting ever more senseless.

8. Police Investigating Possible Homicide in Westover (20,191 views) — ARLnow.com was the first to report on the tragic crime that was also the focus of our No. 9 story. It originally came in on the scanner as two people found dead in an apartment. While it wasn’t reported as a homicide over the air, we immediately sent a reporter to the scene. We waited for a source to confirm our suspicions before we published our report that police were investigating a possible murder-suicide.

7. Stabbing at Ballston Metro Station (20,508 views) — Any time you have a large number of police and fire department vehicles rush to a Metro station, it’s going to get a lot of attention. We reported on this brutal stabbing after receiving numerous tips from readers. A witness report that was retweeted by @unsuckdcmetro also caught our attention: “Someone was just stabbed on inbound platform at Ballston. Blood all over the platform.” We were able to get some initial information from Metro, then update the article with more details the next day.

6. Streetcar Project Canceled (23,411 views) — To say that this news was a surprise is an understatement. After many years of planning and a couple years of pitched controversy and political infighting, Arlington’s ambitious half-billion-dollar streetcar project was nixed with one somber press conference and a quick vote.

We were told that morning (Nov. 18) that a “significant” announcement regarding the streetcar would be coming at noon. But even Arlington insiders were caught off-guard at the sudden reversal. ARLnow.com editor Scott Brodbeck and Sun Gazette editor Scott McCaffrey took bets on what the announcement would be — and both were wrong. The one person who saw this coming was local Democratic political strategist and blogger Ben Tribbett, who told ARLnow.com that “the streetcar is dead” just hours after the historic re-election of County Board member John Vihstadt.

In the weeks following the project’s cancellation, many have tried to dissect the reason why the project was cancelled. After all, the County Board majority had just approved a $26 million contract two months before and was in the midst of a pro-streetcar PR campaign. County Board Chair Jay Fisette cited “political realities” — in other words, the likelihood that at least one of the two pro-streetcar County Board members up for reelection in 2015 would be replaced by an anti-streetcar candidate, thus giving the anti-streetcar faction of Libby Garvey and John Vihstadt the majority. Cancelling the project now potentially prevented a year of wasted spending and, as an added bonus, put an end to the debate that was tearing the Arlington community apart.

While County Board member and stalwart streetcar supporter Walter Tejada lamented what he saw as a sudden, shady effort to oppose and kill the streetcar project, opposition to the streetcar wasn’t just a recent phenomenon. In 2010, an ARLnow.com article on a streetcar meeting attracted numerous negative comments. In 2011, the estimated cost of the project skyrocketed by some $100 million, further galvanizing opposition. In 2012, it dominated a County Board debate that nonetheless featured candidates who all opposed the streetcar.

While some streetcar supporters blamed ARLnow.com’s reporting for fanning the flames of opposition to the streetcar, the fact of the matter is that we merely reported newsworthy streetcar items, and did so in a neutral manner. It was the comment section that featured anti-streetcar rhetoric, even on seemingly innocuous streetcar news.

If anything, supporters should focus their blame on three factors: (1) streetcar opponents were well organized and did a good job of creating an anti-streetcar narrative, while the county’s pro-streetcar PR effort was tepid and lacked a clearly-defined vision for how the streetcar would make life better for current residents; (2) the rising costs of the project, which together with debacles like the million-dollar bus stop and the now-suspended aquatics center convinced moderate voters that the streetcar would be a boondoggle; and (3) Arlington County’s failure to build the streetcar system in a timely manner.

Years went by as the county searched for financing and slowly went about the engineering and planning effort. In those years, costs rose and opposition gained strength. Had the county moved more quickly, not bungled other projects and been better at communicating and — more importantly — executing on its vision, we could have been reporting on the imminent opening of the streetcar system this year rather than its cancellation, before a single rail was installed.