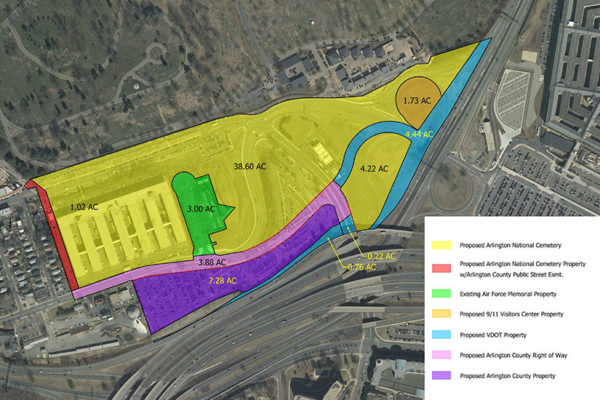 (Updated at 5:00 p.m.) Arlington County and VDOT are considering building a bus maintenance facility on the east end of Columbia Pike, according to Sen. John McCain (R-AZ).

The powerful Arizona Senator sent a letter to Secretary of the Army John McHugh on Wednesday urging him to oppose a planned realignment of Columbia Pike that’s being sought by the county. McCain said the alignment would allow construction of the bus facility but would reduce the number of potential interment spaces available to Arlington National Cemetery as it expands to include the former Navy Annex site.

“We should instead pursue an alignment that maximizes the number of interment sites and places restrictions on the remaining property that ensure whatever is built reflects the solemnity of this national cemetery,” McCain wrote. “It would be shameful to have to tell the family of a fallen American hero that there is no space available at Arlington National Cemetery, because rather than expand its grounds, Arlington County and the Virginia Department of Transportation decided to build a bus maintenance facility.” 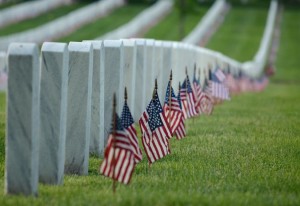 The expansion of the cemetery to the Navy Annex grounds, however, requires the federal government and Arlington County to agree to a land swap.

Brian Stout, the county’s federal government liaison, said late Friday afternoon that a bus facility is just one use that’s being considered for the land along a realigned Columbia Pike. There are no concrete plans for such a facility, and a formal planning process will not begin until the land swap takes place, he said.

An Arlington County heritage center and parking for the Air Force Memorial are among the other potential uses for the land, said Stout.

Stout said Arlington County, VDOT and the U.S. Army reached a “verbal agreement” on July 16, outlining a swap that would give the Army 38 acres of interment space for Arlington National Cemetery north of a realigned Columbia Pike.

According to Stout, that that represents a 250 percent increase in burial space provided to the cemetery compared to space that would be available without a land swap. The swap would reduce the footprint of the road network from 23 to 9 acres, and would provide Arlington County with 7.5 acres of land south of the Pike for county use, Stout said.

Stout said it’s incorrect to say that the county is “planning” to build a bus facility on the land, though it is a potential use. He denied that discussion of a bus facility has “stalled” talks with the Army, as McCain claims.

Earlier this year the Arlington County Board approved a $14.2 million project to expand and enhance its Arlington Transit bus facility along S. Eads Street and Route 1. Construction on the project is expected to begin this month and last 18 months.

Despite the large investment, the county notes on the project page that an additional ART facility is needed, especially in order to enhance bus service on Columbia Pike in the wake of the cancellation of the Pike streetcar project.

“The new bus facility will not be large enough to fully house the existing ART fleet, or current plans for fleet expansion, nor will it accommodate additional buses that may be necessary to enhance bus service along Columbia Pike and Crystal City-Pentagon City,” the county says. “Where to add bus maintenance and parking space is one of many County needs being examined by the Community Facilities Study, a broad-based, year-long planning effort launched in January 2015 by the Arlington County Board and the Arlington School Board.”

The full letter from Sen. McCain, after the jump.

Arlington National Cemetery is our Nation’s most revered and hallowed ground where those who gave the last full measure of devotion have been laid to rest since the Civil War. Unfortunately, space at the cemetery is limited, which makes it imperative that we seek all available opportunities to maximize what space remains in and around the cemetery. With the demolition of the Navy Annex, additional land is now available for the expansion of the cemetery once Columbia Pike is realigned through the Defense Access Road program.

It has recently come to my attention that efforts to work with Arlington County and the Virginia Department of Transportation have stalled because of their insistence on an alignment that would reduce the number of interment sites and allow the county to construct a bus maintenance facility. I am sure you would agree that we should instead pursue an alignment that maximizes the number of interment sites and places restrictions on the remaining property that ensure whatever is built reflects the solemnity of this national cemetery.

It would be shameful to have to tell the family of a fallen American hero that there is no space available at Arlington National Cemetery, because rather than expand its grounds, Arlington County and the Virginia Department of Transportation decided to build a bus maintenance facility. As things stand today, it is estimated that the cemetery will run out of interment sites in less than 10 years. However, including the adjacent properties would extend the life of the cemetery and allow another 7,600 interment sites to be added.

As you proceed with discussions on this matter, as well as the transfer of property at Fort Monroe, I encourage you to pursue a solution that maximizes property for the cemetery and restricts incompatible use, and to use whatever tools available to you to ensure this outcome.