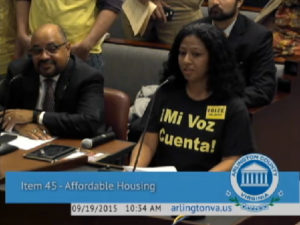 Affordable housing supporters showed up in force to the meeting, well outnumbering critics who questioned the use of taxpayer funds to house residents who could otherwise not afford to live in a desirable, increasingly affluent inner suburb like Arlington.

Young parents, immigrants, teachers, seniors, businesspeople and clergy members, among others, spoke passionately in support of the plan, which calls for the creation of 15,800 new committed affordable housing units over the next 25 years.

“My parents always say that they know that in the future we will do a lot more than they have… and I believe that,” said one speaker, an Arlington Public Schools graduate and current Marymount University student who grew up in affordable housing. “I want our future generations to have better access to economic mobility, and in order for them to excel and become successful professionals, they need a stable home and a world-class education just like the one I know I am blessed to have received from APS and affordable housing.”

The Affordable Housing Master Plan approved by the Board was the culmination of three years of study and community engagement. Board members and community members spoke of the “marathon” process that led to the plan’s passage. Some spoke of continuing “the grand legacy” of former County Board members and local legislators who were instrumental in the county’s early support of affordable housing.

The plan provides a framework and goals for affordable housing in Arlington, but stops short of funding or planning individual housing developments. Under the plan, the County will try to dramatically increase the supply of housing that’s affordable primarily to those making less than 60 percent of the area median income.

“Between 2000 and 2013, the number of units affordable to low-income individuals and families in Arlington decreased from approximately 23,000 to 10,000,” the county noted in a press release. “Most of the 13,500 rental housing units were ‘lost’ to rising rents and redevelopment activity. The County’s current inventory of 7,000 Committed Affordable Units (CAFs) — units that are contractually obligated to remain affordable for decades — has only partially alleviated the loss of market-rate affordable units (MARKs).” 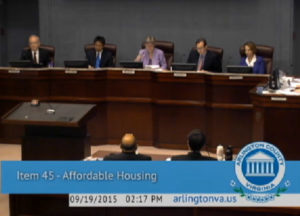 County Board Chair Mary Hynes said that affordable housing is integral to keeping Arlington an inclusive and diverse community.

“This affordable housing plan continues our long tradition of providing housing so that individuals of all ages, races and incomes can come together to make a great community we can all call home,” Hynes said in a statement. “In the end we — and the generations that follow us — will all benefit from the great thinking that went into this plan.”

Among the personal affordable housing stories the Board heard was one from Claudia Delgadillo, an APS teacher and parent and a representative of the newly-formed group Mi Voz Cuenta — “My Voice Counts.” Delgadillo was once a recipient of free and reduced launch at school, but said she worked to put herself through Northern Virginia Community College and George Mason University.

Delgadillo said the hard-working immigrant community along Columbia Pike — those who are relying on Arlington Public Schools to educate their children so they can achieve a better life — deserved to have their voices heard, since they were among the most vulnerable to getting priced out of Arlington.

“We are the residents who are most actively feeling the housing crisis,” she said. “You think about us as statistics and have good intentions. We build your houses, we teach and take care of your children, we make your pupusas — don’t push us out, don’t speak for us.”

Also speaking in support of the plan was Katherine Novello, a founding member of the group Coalition of Arlingtonians for Responsible Development. Mi Voz Cuenta was formed partially in response to CARD, which pushed back against what it saw as an increasing concentration of affordable housing in South Arlington. Novello said the group was satisfied with changes to the plan intended to better distribute affordable housing throughout the County.

The plan “better reflects the vision of Arlington as a truly diverse and inclusive community,” said Novello. “I feel fortunate to live in a place where all voices count.”

Novello said that her husband grew up in affordable housing with his three brothers, while his mom, a single mother, went back to college. Ultimately, she became a teacher and then a school counselor, and the family was able to move out of affordable housing, she said.

“Safe, stable and affordable housing was a cornerstone to their ultimate success.” she said. “I am so proud to live in a county that seeks to provide that opportunity to others.”

Some County Board members had to choke back emotion before casting their vote.

“I’m humbled today and I’m honored today to have sat in this room and heard this testimony,” said Hynes. “It’s been a challenging conversation, but it’s a critical conversation to have. Our goal is for people of all ages, backgrounds and incomes to keep choosing Arlington. This is a place where the American dream can be real, and anybody who wants to bring their best self can be part of our story. That’s what we’re doing with this plan.”

“During the testimony today, I found it difficult to not shed a tear, and a couple of times I did have to leave because indeed the testimony was compelling,” said County Board member Walter Tejada, who will be retiring along with Hynes at the end of the year. “Today I want to express my solidarity with those on the margins and thank those who support those on the margins. I feel, I’ve tried hard in my service here on the board, to act on principles of fairness and equality in pursuit of peace and justice, here on our little piece of the rock. And I do care for those on the margins, those who may feel that they lack the resources to command the attention of politicians.”

The affordable housing plan, however, was not without its critics.

“It’s heartening to see all the opportunists here who have taken taxpayer subsidies to get housing, and are now taking the opportunity to get more,” said local civic activist Bernie Berne. “Let’s face it, there’s plenty of affordable housing, market rate in Herndon. great, the Silver Line is going out there. They have to commute, just like the rest of us commute.”

“Basically, what this plan says, is put this affordable housing near the transit. Great, they’ll live here, they’ll work in D.C. Some of them will even come from DC and find the cheaper housing here, afforded by taxes, and return to DC to work. This is what happens,” Berne continued. “Yes, there are some really needy people, the sick, the elderly, that’s not what we’re talking about here. Those should be protected, not the others.”

Independent County Board candidate Audrey Clement was skeptical of the affordable housing plan, suggesting that it will continue to push out middle class Arlington residents while real estate development continues unabated.

“The fact that the county is trying to sell this plan without a price tag should send a message to the voters. Caveat emptor, let the buyer beware,” Clement said. “In sum, the [plan] is a political ploy to make people feel good as they are being recycled out of the county. It solves a political problem by papering over the gentrification that continues apace.”

Some critics have pointed out that a formerly oft-repeated line about affordable housing — that it allows public servants, firefighters, cops and teachers to remain in the county — isn’t borne out by actual statistics of who lives in affordable housing in Arlington. In reality, affordable housing residents are far more likely to be restaurant and retail workers, construction workers and taxi drivers.

While the business community has spoken out in favor of workforce housing to keep such workers closer to their jobs, it perhaps doesn’t have the emotional weight for local residents of saying that their children’s teachers are potential affordable housing residents. Still, at least one APS teacher said the plan will be good for educators, who may be able to afford Arlington now but may not in the future.

“For Arlington’s teachers, assistants and other staff members, the ability to live where they work and build those connections seems to be slipping away,” said Josh Folb, a math teacher. “We talk about the lowest wage-earners, but even our teachers — not just the new teachers, veteran ones as well — fall into this need. New teachers in Arlington make less than $55,000, and even veteran ones make less than $85,000.”

“For Arlington’s teachers across the spectrum, even ‘workforce’ housing is a stretch,” Folb continued. “So what should we as a county do? Before you is a great step, some may object to this plan, because it is not perfect. Please do not let the perfect get in the way of the good.”

County Board member Libby Garvey acknowledged that, if implemented, the affordable housing plan will have its costs. (Currently, Arlington devotes about 5 percent of its overall budget to housing, and currently there are about 7,000 committed affordable units in the county.) However, she said the process and the plan will ultimately be worth the price.

“We put a lot of our treasure, as Mrs. Hynes often likes to say, into affordable housing: time, effort, intelligence and a lot of funds,” Garvey said. “I think this affordable housing plan gives us a much-improved structure to deal with these very strong forces. It really is just a structure. One of the things that’s happened in the development is that the community has gotten some dialogue, gotten to know each other better, and we’ve formed more of a team to work together on this.”

CARD would like to congratulate the County Board and County Staff on the passage of the Affordable Housing Master Plan (AHMP).  We are thankful for the work that has been done over recent months to fine-tune and improve the AHMP and Implementation Framework so that they better reflect the vision of Arlington as a diverse and inclusive community.

We are especially heartened to see that a core focus of the plan has shifted, at CARD’s urging, to affirm a commitment to affordable housing development opportunities throughout all of Arlington’s neighborhoods.

We still believe that the plan could have gone further to encourage housing affordability throughout Arlington, especially concerning the building of on-site affordable units in new development projects.  CARD proposed creating a committee to study and provide recommendations regarding possible changes to the Affordable Dwelling Units Ordinance.  This legal authority, which largely governs Arlington’s affordable housing efforts, substantially limits the county’s ability to encourage developers to build affordable housing units on-site.  This is a policy proposal that can be embraced by all advocates for affordable housing.

We look forward to continuing to work with the County Board, County Staff, and community stakeholders to advocate for more affordable housing throughout all of Arlington.