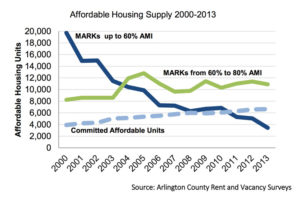 In five years, there could be virtually no market-rate affordable apartments left in Arlington, according to county planning staff.

In 2000, 19,740 apartments owned by for-profit property owners in the county were affordable for someone making up to 60 percent of the region’s area median income, according to findings from the county’s three-year Affordable Housing Study. In 2013, there were 3,437 “MARKs,” as they’re called.

(“Affordable” is defined as costing less than 30 percent of a household’s income.)

If the trend holds, there will be a “negligible” amount around the county by 2020, according to Russell Danao-Schroeder, senior housing planner in the county’s Department of Community Planning, Housing and Development.

“If you just look at that chart [above], and if you do a trend line analysis projecting that out, it’s easy to see where that goes,” Danao-Schroeder said. “It crosses zero before 2020.”

That is the reality the Arlington County Board will grapple with as it works toward adopting an Affordable Housing Master Plan in July. The affordable housing study has completed its research and staff, along with the Affordable Housing Study Working Group, released findings and recommendations last month in a draft master plan.

The draft master plan sets a goal of making 17.7 percent of all housing units in the county affordable at 60 percent AMI. If county projections hold true, that would mean asking developers to build 15,800 CAFs in the next 25 years. Even Danao-Schroeder, who helped draft the plan, admitted the goal isn’t pragmatic.

“That 17.7 percent number is what we would need to have sufficient housing for households at all income levels,” he told ARLnow.com on Friday. “That’s an awful lot. It’s going to be hard to hit that, but that’s the mark that we need to aim for.”

Members of the County Board have time and again reaffirmed their commitment to affordable housing, and a county-run survey of Arlington residents indicates the community approves of the Board’s efforts. In 2012, the Board launched the study with a charge of creating “a shared community vision of Arlington’s affordable housing as a key component of our community sustainability.” 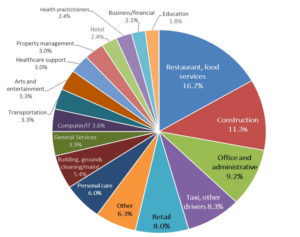 Proponents of affordable housing often say it’s necessary for Arlington to have places for people like teachers, policemen and firefighters to live within the county. However, according to a survey of 336 CAF residents — 5 percent of the county’s CAF population, “a fairly large sample size” Danao-Schroeder said — only 1.8 percent work in education. Of those respondents, none were Arlington teachers or classroom aides.

There is no data for public safety employees, CPHD staff said. If any live in CAFs, they would be among the 6.3 percent who responded “other” to the survey.

“Arlington County pays their teachers well and pays their public safety people well,” Danao-Schroeder said. “Other areas in other service sectors that we all depend upon in our daily lives are the primary clients and tenants of affordable units.”

The largest industry represented in CAFs is restaurant and food service at 16.7 percent. Construction workers account for 11 percent of CAF residents, with office workers like receptionists in third place at 9.2 percent, followed by taxi and other drivers at 8.3 percent.

The master plan, when adopted, will be a component of Arlington’s Comprehensive Plan. The county is required by state law to include an affordable housing provision with its comprehensive plan.

“There’s a responsibility to plan for and provide for how you meet the housing needs of residents of all income levels,” Danao-Schroeder said. 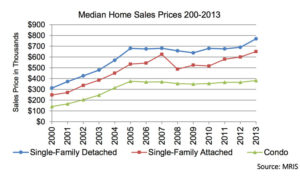 In other words, proponents say, Arlington can’t simply ignore its housing market increases — it has to act. Beyond the loss of potentially all MARKs from the county, there are several other indicators that show Arlington’s housing market is only getting more and more expensive, shutting out lower income residents.

Comparing data from the 2000 U.S. Census and the 2012 American Community Survey, the number of Arlington households with $200,000 or more in annual income has grown 59.8 percent, while households making less than $60,000 has shrunk by 9.9 percent.

During the same time period, the median price of a home sale in Arlington has increased 140.3 percent, according to the study. The median rent has gone up 90.9 percent. The average two-bedroom apartment costs $2,114 a month, more than 50 percent of the monthly income of the average CAF two-bedroom household in Arlington.

“Certainly, Arlington’s a desirable place to live, and as more people with more economic means move here, it means that landlords are able to raise the rents,” he said. “About two-thirds of the loss of market-rate affordable housing is strictly from rent increases.”