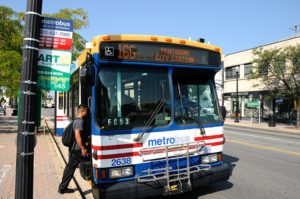 Fear not, Columbia Pike residents — a post-streetcar transit plan for the corridor is on track, county officials tell ARLnow.com.

Arlington County is formulating the Pike transit plan as part of its Transit Development Plan (TDP), a state-mandated, ten-year strategy for bus service in the county. The process is expected to conclude by May 2016.

The county will be holding a series of workshops on the TDP starting Tuesday, Oct. 27. Input from the public is “critical to the success of future bus service in Arlington,” says the county’s TDP webpage, which has the full schedule of all four workshops.

This winter, following months of community outreach, the county expects to release preliminary recommendations for transit service improvements. The county will then gather more community feedback and make more tweaks before the plan is presented to the County Board next spring.

We’ve made significant progress on preparing the TDP update since the consultant team came on board in July. The consultants have been compiling and analyzing a large array of data to evaluate how existing ART and Metrobus services in the County are performing, including on-time performance, ridership and productivity. The input received from over 3,300 survey respondents, as part of the first phase of TDP outreach conducted this spring, was also reviewed and incorporated into the service assessment.

We are coordinating with our regional partners including Fairfax County, City of Alexandria and the District of Columbia to obtain their input, as well as WMATA staff related to the evaluation of transit services on Columbia Pike and in Pentagon City and Crystal City. We remain on track to prepare the TDP update by May 2016, when it is due to the Virginia Department of Rail and Public Transportation.

Following the streetcar’s cancellation last November, residents and business owners who were looking forward to the economic development the streetcar promised to bring to the Pike asked “what’s next?” Streetcar opponents said enhanced bus service would take the place of the streetcar and provide many of the same benefits.

“People need to understand that we will get a bus rapid transit system going,” County Board member Libby Garvey said on the day the streetcar was cancelled. “It will do everything the streetcar could and more. They’re going to be just fine.”

Nearly a year later, with little public discussion about transit save an online survey, some have expressed frustration that the Pike is still clogged with the usual buses and traffic, with no viable streetcar alternative in sight. A number of residents have even taken it upon themselves to propose exotic transit solutions, no matter how infeasible.

In May, County Board member John Vihstadt, who helped lead the charge against the streetcar, floated the idea of “Circulator-type buses” on the Pike. That was greeted with a collective groan from the pro-transit crowd at Greater Greater Washington.

“It’s sad that in a couple years, Arlington’s sense of itself and its national reputation for excellence, innovation, and forward thinking in transportation planning has degraded so much,” wrote Richard Layman, in the comments.