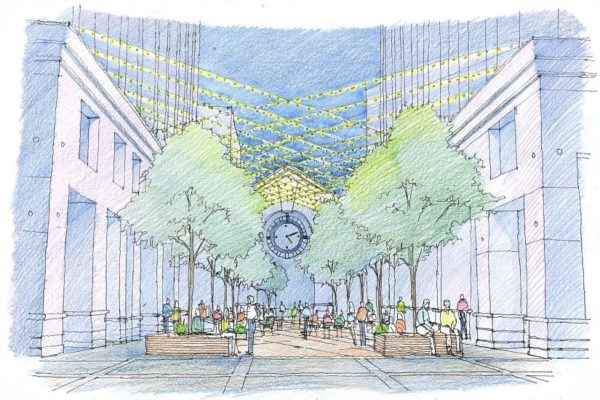 The seemingly endless construction at Courthouse Plaza — the privately-owned, open-air shopping center near the Courthouse Metro station — is finally nearing an end.

The final phase of construction at Courthouse Plaza is underway, we’re told, completing a series of improvement projects to the property that has extended over the course of the last several years.

The project currently under construction will make streetscape improvements along Clarendon Boulevard to “create a new pedestrian experience.” These improvements include installing new pavers — the stone along pedestrian walkways — and updating the entry into the plaza itself.

Once complete, the plaza will have a new, outdoor gathering space with seating. The area will also have contemporary landscaping features.

These outdoor improvements mark the end of the last phase of capital improvement projects for the building, according to Mara Olguin, spokeswoman for the property’s owner, Vornado. She said plans to make these improvements began more than three years ago and have involved multiple projects.

Some of these include the lease renewal and renovations to the AMC movie theater and improvements to the parking garages at 2200 and 2300 Clarendon Blvd. Before that, Vornado also oversaw the installation of new brickwork in the plaza.

Olguin added all the projects mentioned are consistent with the new Courthouse Sector Plan and Retail Action Plan, which the County Board approved last summer.

Construction work on the plaza’s outdoor area will continue through the winter and early spring. All work is expected to be completed by this April.