The second round of closures related to Metro’s yearlong SafeTrack maintenance plan is slated to take effect today, with big impacts to Blue Line service in Arlington.

Maintenance crews will work on portions of the Orange, Silver and Blue lines until July 3, according to a service advisory. 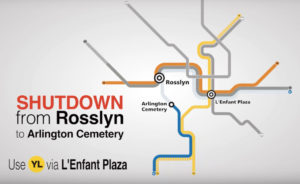 Metro will provide shuttle service for riders traveling to and from affected stations. Arlington County has also expanded ART 43 service, which runs between Rosslyn and Crystal City, on middays, evenings and weekends until Aug. 20.

Trains may be extremely crowded, especially during rush hour, Metro officials said. Regular riders are encouraged to use commuting alternatives such as carpooling or telecommuting.