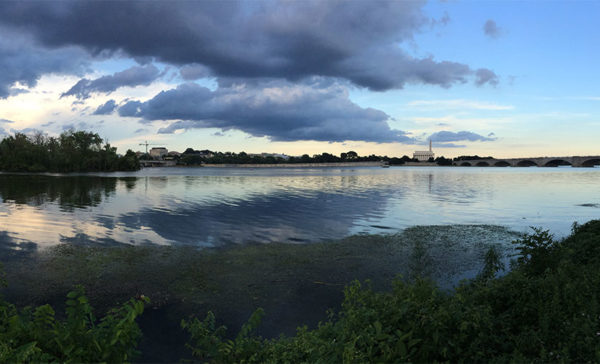 Former Mansion Owner is In Jail — Rodney Hunt, the man who once owned the $23 million Arlington mansion that’s being used to throw large parties (and which was recently sold at a foreclosure auction), is currently in the Arlington County jail. Hunt was ordered to spend 90 days in jail earlier this month for violating his parole. An attorney says Hunt doesn’t know anything about the parties. [Washington Post]

Tourists Can’t Handle the Heat at the Cemetery — Anytime it gets sufficiently toasty outside, medical calls to Arlington National Cemetery become frequent. Tourists at the cemetery regularly suffer heat-related ailments that require paramedic dispatches during the summer. The cemetery is advising visitors to wear sunscreen and bring a bottle of water during the warm weather months. [Twitter]

Airbnb Is Costing Arlington Tax Revenue — Arlington County has yet to figure out a good way to get those renting out their homes on Airbnb to pay the county’s 5.25 percent lodging tax, which is paid by hotels and should be paid by Airbnb hosts. “Very few of the folks who should be paying taxes have stepped up to fork over the money,” reports Michael Pope. [WVTF]

Art Murals in Crystal City — Crystal City has more than two dozen outdoor art murals, implemented by the Crystal City Business Improvement District. The murals are part of an effort to “visually revitalize the area,” which is noted for being something of a concrete canyon. [Curbed]

Teacher Salaries By School — A list shows the average teacher salary, by school, at Arlington Public Schools. Topping the list is Kenmore Middle School, at $80,411. At the bottom of the list is the Arlington Mill high school program, at $61,731. [Patch]

APS Finance Chief Wins Award — Leslie Peterson, the assistant superintendent for finance and management at Arlington Public Schools, is one of three officials in the U.S. to receive the 2016 Pinnacle of Achievement Award from the Association of School Business Officials International. [InsideNova]

Amtrak Police Chief Shared Apartment With ‘Alleged Boyfriend’ — Amtrak Police Chief Polly Hanson, who’s under investigation for fraud and conflict of interest, reportedly shared an Arlington apartment with her “alleged boyfriend,” a senior director at a contractor that Amtrak hired under Hanson’s supervision. The two also are said to have co-owned a condo in Dewey Beach, Del. [Washington Post]