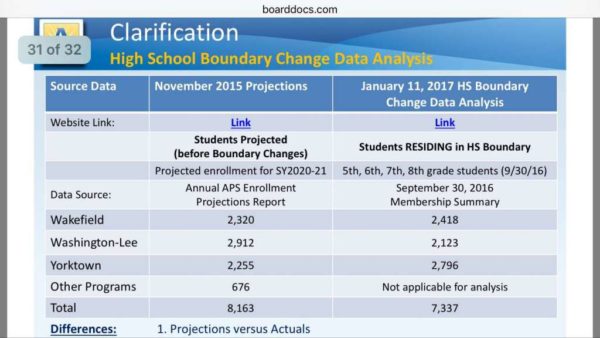 The consultant, Dr. Richard Grip, previously worked on the Arlington Community Facilities study. He will be studying the way APS projected enrollment during its recent high school boundary change process.

“To ensure our methodology follow best practices, we have hired an external statistician who will review the projections and methods used,” said APS Assistant Superintendent Linda Erdos. “The November projections will be updated in March, which is our standard practice, to finalize the budget for next year.”

The move comes as parents are questioning a slide from a recent School Board meeting (above) that seemingly shows overcrowding at Yorktown following the controversial boundary changes, which shifted students from overcrowded Washington-Lee to the somewhat less crowded Yorktown and Wakefield.

“The projected attendance numbers used during the redistricting process were wrong,” said an email that has been circulating among parents, which was forwarded to ARLnow.com. “APS staff underestimated the number of students who will be attending Yorktown in 2020/21 and now Yorktown is projected to be over capacity by about 700 students… apparently a new consultant has been hired to re-do the projections.”

Erdos, however, says that is not the case. The slide, she says, shows two different things: enrollment projections bef0re boundary changes and the total number of students in each of the three high school zones. But the latter numbers, shown in the right column, include students who attend magnet/choice schools like H-B Woodlawn and the new Arlington Tech program, and thus do not reflect any sort of net enrollment projection.

“The November projections vs. January analysis is like comparing apples and oranges — they were developed for two totally different reasons,” Erdos said. “The January report was only intended to be an analysis of the ethnicity of the student population in the three neighborhood boundary zones because of earlier questions raised.”

“Staff is not aware of any plan by the School Board to revisit high school boundaries at this time,” Erdos added.

Superintendent Dr. Patrick Murphy is expected to address the projections review and timeline during tonight’s School Board meeting.