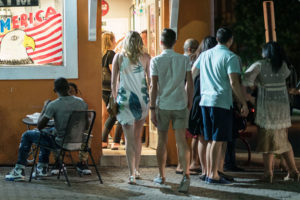 Millennials in Arlington appear most concerned about adding more transit options, removing on-street parking and finding new locations for public meetings, at least according to a county-run online forum.

The findings come from the county’s Engage Arlington website, which launched a millennial-focused forum about county issues earlier this summer.

The forum is part of a wider push by the county to get more millennials involved in local government and civic life. Arlington was named the best city for millennials in the U.S. by the website Niche, with the millennial generation making up between 30-40 percent of the county’s population of just over 220,000.

The most popular suggestion on the forum — as determined by a Reddit-style up-voting system —  is to expand transit options in North Arlington, which has nine “likes.”

I’d love to embrace “Millennialism” and be car-free, but the inconsistency in transit options in parts of North Arlington is difficult — there is minimal bus service and a lack of bikeshare stations, even near Marymount University. Adding bikeshare locations along the northern portion of Glebe Road from Lee Highway up to Chain Bridge would be helpful in continuing to connect this area with other parts of the County!

Just below that is a proposal to remove on-street parking, to encourage more walking and biking in neighborhoods.

Along the major corridors we should remove subsidized on-street parking, to encourage walk-able and bike-able neighborhoods. Many of these on-street parking spots reduce visibility at cross walks and cause dooring and blocking situations for bike lanes, increasing danger and reducing foot traffic. Remove a few strategic parking spaces along the pike and Roslyn [sic] Ballston corridor and use that space to widen the sidewalks or add bike lanes.

Following that, two suggestions are tied for third with seven likes: requests to change the locations of public meetings to “places millennials frequent,” as opposed to always at community centers or schools, and to find a “transit solution” for Columbia Pike after the canceled streetcar project. (The Pike’s “Premium Transit Network” is set to launch next summer.)

A request to “figure out how to bring reasonably priced housing to Arlington” was among those with six up-votes.

A full list of suggestions and the number of likes they received, in parentheses, is below.

END_OF_DOCUMENT_TOKEN_TO_BE_REPLACED

More Stories
Morning NotesPlans for Va. Square Redevelopment Could Be Discussed by Commission This Fall