RSVP today for one of the five remaining FY 2019 Budget Roundtables: https://t.co/3LMgasq8Qf pic.twitter.com/OF0Q5XsHR7

In an infographic released yesterday (Tuesday) ahead of more public roundtables to discuss the FY 2019 budget, county staff highlighted how the county spends its money and the challenges ahead.

According to the data, the biggest expense in the county’s operating budget is Arlington Public Schools, which is allocated $490.2 million by the county, or 39 percent of its budget. Human services and public safety are second and third, around $140 million each, or 11 percent. 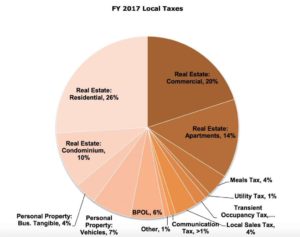 Among the challenges ahead, staff said APS enrollment has grown by 850 students a year for the last five years, and it takes up almost all of the $510 million raised from real estate taxes on homes, condos and apartments.

And with Metro needing more money and an office vacancy rate of 17.8 percent, which keeps commercial real estate revenue down, county leaders are expecting some tight fiscal times and hard budgetary decisions.

A number of groups will be looking to influence county leaders’ thinking during the budget discussion. Among them is IAFF Local 2800, the Arlington Professional Firefighters and Paramedics Association.

In a tweet Tuesday, the group said firefighters, paramedics and police officers need a market adjustment to their salaries — a pay rise to keep up with inflation and the rising cost of living — to “remain competitive.” The last adjustment was in 2013.

According to figures provided to ARLnow.com by IAFF Local 2800, starting pay for county firefighters is 20 percent below the regional average and only $2 more per hour than the county’s minimum wage.

Local 2800 added that new firefighters will earn 12 percent less per hour over a 20-year career compared to their peers in Fairfax, Prince William, Prince George’s and Montgomery Counties, the City of Alexandria and D.C.

“Arlington invests a tremendous amount of money in hiring, training and developing its firefighters,” said Brian Lynch, President of Local 2800. “Every time a firefighter leaves the department for another opportunity or does not complete their probationary period, we consider this a loss of an investment in human capital. If the department’s physical capital, vehicles, tools etc. were being lost the way we are losing our people, it would be considered common sense to try to stop the losses. There is not only a moral imperative to fairly compensate those who risk their lives to protect the community, there is also a fiscal imperative.”