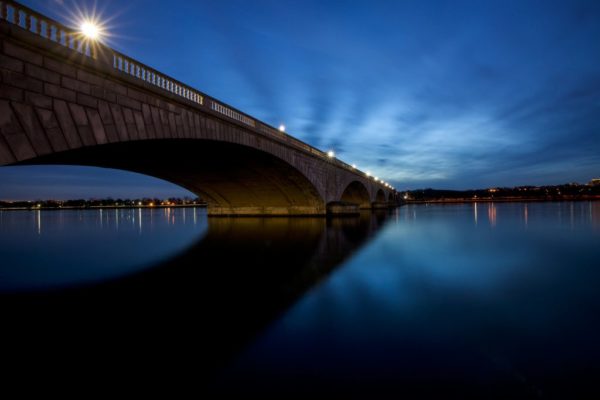 Alexandria Absent from Short Bridge Park Plans — “While plans for the border-spanning park are underway on the Arlington side, one frustration expressed at the County Board was that Alexandria has no plans to develop its side of the park… ‘That’s a little disappointing,’ County Board member John Vihstadt said. ‘I am concerned we’re going to be spending significant amounts of money for improvements on the Alexandria side.'” [Arlington Connection]

Commuting Satisfaction in Arlington — According to data from Arlington County’s Mobility Lab, Arlington residents commute to work by means other than driving alone 60 percent of the time. Those who walk or bike have the highest rate of satisfaction with their commute, while those who take a train have the lowest satisfaction rate. [Mobility Lab]

Fmr. Clarendon Restaurant Owners Like Falls Church — David and Rebecca Tax, the founders behind classic Clarendon restaurants like Big Belly Deli, Lazy Sundae, Clare and Don’s and Mexicali Blues, are happy with their decision to move Lazy Sundae and Clare and Don’s to Falls Church more than a decade ago. “Falls Church is a lot like what Clarendon was like in 1996 when we opened Lazy Sundae,” said David, while Rebecca remembered the Clarendon of the mid-to-late 90s as “more family oriented, fewer singles.” [Eater]

Mobile Phones Could Be Banned at Pentagon — A military review of personal electronics policies, ordered by Defense Secretary Jim Mattis, could result in non-military cell phones being banned at the Pentagon. About 30,000 servicemembers, civilians and contractors work at the Pentagon. [Stars and Stripes]

Japanese Embassy Lauds New Arlington Decal — Via a tweet from the Embassy of Japan in D.C.: “As this year’s @CherryBlossFest nears, we’re excited to hear that the blooming cherry trees along the Potomac River will soon be displayed on windshields in Arlington County. Congratulations to @OConnellHS’s Schuyler Workmaster for winning @ArlingtonVA’s decal contest!” [Twitter]