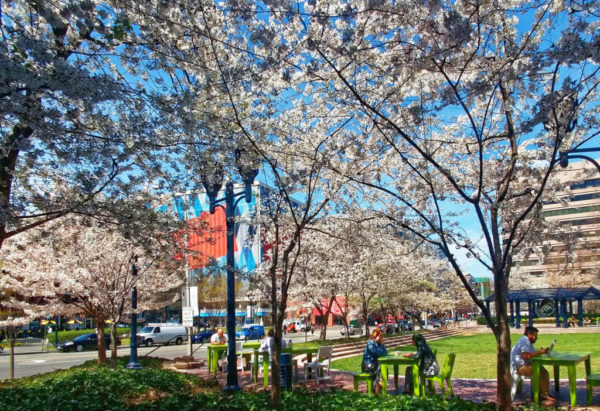 Petition in Support of Affordable Housing Project — The website Greater Greater Washington is helping to promote a petition that intends to counter resident complaints about a proposed affordable housing project on the former Red Cross site along Route 50. Neighbors are concerned that the project might “defile” the Buckingham neighborhood, with increased traffic and school overcrowding and a loss of green space. [GGW, GGW]

‘A Friend’ Writes Thank You Note to ACPD — From the Arlington County Police Department Twitter account: “To the citizen who left this unexpected note on one of our cruisers, thank you. ACPD is grateful for the support we receive from the community and small gestures like this mean a lot to our officers.” [Twitter]

Arlingtonian Places 23rd at Boston — Among other impressive finishes by Arlington residents at the Boston Marathon on Monday, Graham Tribble finished 23rd with a time of 2:30:06, the fastest among the D.C. area contingent at the prestigious race. [RunWashington, Patch]

High Schools Students Learning How to Spot Fake News — “At Wakefield High School in Arlington, Virginia, outside Washington, some high school seniors are bent over their laptops, engaged in a digital course called Checkology that helps them figure out what makes news and information real, misleading or just plain false.” [Voice of America]

Elementary Girls Heading to Int’l Problem Solving Competition — “An all-girls engineering team from Glebe Elementary School is heading to the 2018 Odyssey of the Mind World Finals where they will compete with students from nearly 25 countries… The team of fourth graders from Glebe, who are all ages 9 or 10, became state champions last weekend at the Virginia Odyssey of the Mind competition, which was held April 14 in Newport News.” [Arlington Public Schools]

ACPD Forms ‘Restaurant Liaison Unit’ — The Arlington County Police Department has formed a “Restaurant Liaison Unit” to work with local bars to tamp down on drunken and sometimes violent incidents. One Clarendon bar in particular had police responding to it for a call almost every other day in 2017. [Washington City Paper, Twitter]