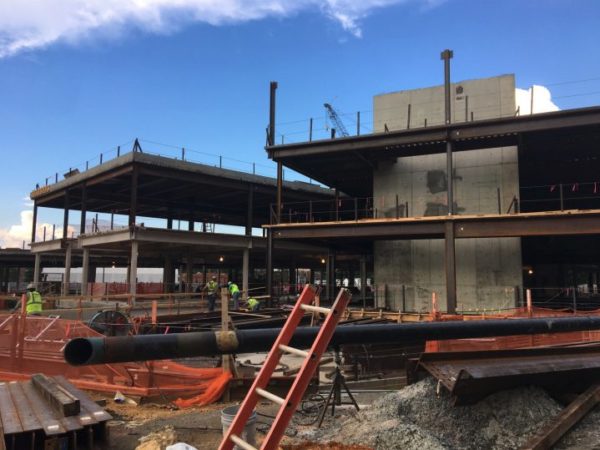 Arlington may spend slightly more on school construction than some of the county’s peers around the D.C. region, but a long-awaited audit report suggests that the school system has done a decent job holding costs down in recent years.

Prepared by an independent firm for the School Board’s internal auditor and released today (Monday), the new analysis commends Arlington Public Schools for matching other dense urban areas like Alexandria and D.C. when it comes to the cost of new school construction. The audit found that the county does tend to spend more on architectural and engineering work than some of its neighbors, but analysts chalked up that discrepancy to Arlington’s challenges finding space for new schools.

APS has earned plenty of criticism for its spending on construction projects in recent years, particularly after a state analysis showed that the school system spent significantly more on the new Wakefield High School than other counties around the state did on comparable projects. The Board hired an internal auditor, John Mickevice, in 2014 as debate raged across the county about the costs of major construction efforts of all sorts, and he commissioned this review of costs last October.

In general, the audit found that the school system is hardly perfect when it comes to managing big projects — for instance, the analysts note that Arlington’s lengthy public engagement process does inevitably tend to drive costs up — and includes some suggestions about how APS might streamline some of its design and acquisition practices. But it also does not contain any sweeping indictment of the school system’s methods, finding that Arlington has often paid less per seat for its elementary and high schools than its neighbors.

“Even with our challenges, this shows we’re still in the ballpark with everyone else,” School Board member Barbara Kanninen, the chair of the Board’s audit committee, told ARLnow. “This idea that somehow we’re too extravagant is simply not confirmed… and it is a little bit validating.”

In all, the audit found that the county’s high schools cost less to build than nine of the 14 other schools around the region that analysts examined. The firm, Bethesda-based O’Connor Construction Management, primarily focused on schools in Loudoun County, Fairfax County, D.C., Alexandria and Montgomery County, Maryland.

Fairfax County had the lowest costs of the bunch, with prices ranging from $33,100 per seat to $40,400 for new high schools.

But the analysts noted that Fairfax, Loudoun and Montgomery all benefited from working with considerably more open space than similar projects in Arlington or D.C. Not only has that forced the county to pay significantly more to build underground parking structures at some schools, but APS can’t simply replicate the same school designs at each site.

“APS does not have the luxury of developing uniform design specifications, due to the dense urban location of its schools,” the analysts wrote. “Thus, each school is designed to meet the particular needs of the community’s students.”

As Kanninen puts it, the school system can’t simply take a design “off the shelf” and use it over again the exact same way — the audit estimates the additional design work can bump up the costs of Arlington’s projects by as much as 1.5 percent of the total construction cost, compared to the county’s neighbors.

That being said, the analysts found that “the increased staff involvement — in time and resources — during the community engagement process” does also tend to edge the county’s costs a bit higher. But they also awarded APS high marks for its energy efficiency standards, which should help generate savings in the long term.

The report recommends a whole host of new contracting practices for APS to adopt, and suggests that the school system tweak some of its methods for buying things like school furniture.

Kanninen says the Board plans to take a close look at all of those recommendations, particularly one suggesting that APS emphasize “value engineering” throughout the design process to keep costs down. She added that the Board specifically asked the analysts to include those recommendations for changes in the report, which delayed its release slightly.

School leaders had initially hoped to have the audit in hand this summer, prompting some grumbling about the report’s delay, but Kanninen wants to assure the community that were no ulterior motives at play.

“People think we were trying to figure out how to pitch this story, but that was not the case at all,” Kanninen said.

Kanninen, the Board’s lone member up for re-election this year, said she is acutely aware that the subject of school costs has become a hot-button political issue. Even though she expects the report won’t quiet all the school system’s critics, she hopes it reassures taxpayers that their money is being well spent.

“There are always going to be people who believe we’re spending too much… but I think it’s going to lend some confidence to the community that we’re spending wisely,” Kanninen said. “The School Board took this proactive step to look into this and it’s a positive thing. There’s a lot to be proud of here.”

Now, county and school leaders are trying to schedule a joint meeting of their respective audit committees to discuss the report in more detail, according to County Board member John Vihstadt. As co-chair of the county’s audit committee, he hopes to use that gathering to gain “a collective understanding of the audit findings and look to collaborative next steps to address them.”

Happy Friday, Arlington. Hope you had a nice Thanksgiving! Today might have been a light publishing day for us, but rest assured: we’re not hearing of much news happening locally,…

The National Weather Service has issued a Special Weather Statement about the strong winds that are currently gusting in Arlington and across the region. Forecasters are cautioning that the gusts…

A 3 BD/1 BA home on one level, and new roof, stove and refrigerator is included in the latest Open Houses.

As people begin to travel for the holidays, this week’s Statutes of Liberty discusses new COVID-19 requirements for travel.