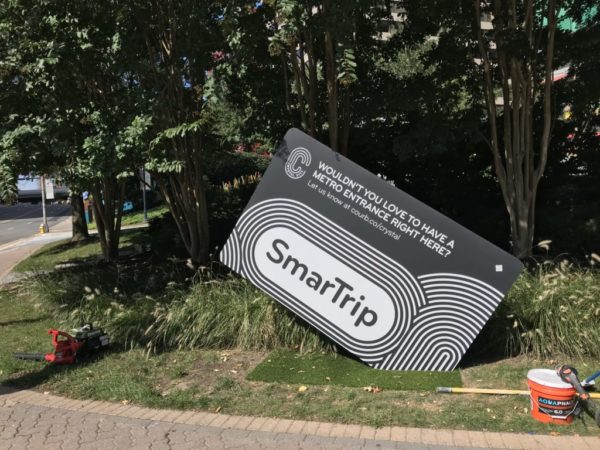 WhyHotel Coming to Columbia Pike — “WhyHotel has just signed a deal for its second project in Arlington.  WhyHotel signed on with Orr Partners to operate temporary hotel rooms in 150 of the 366 units in the Centro Arlington development… [which] is replacing the former Food Star grocery store at the intersection of Columbia Pike and S. George Mason Drive.” [Bisnow]

New Scalia Statue at GMU Law School — “As debate raged on Capitol Hill over a Supreme Court nomination that could shape the court’s future for decades, five justices gathered Thursday at a law school just across the Potomac River for the unveiling of a statue honoring an icon from its recent past — the late justice Antonin Scalia.” [Washington Post]

Arlington Living Wage Calculator — According to the Massachusetts Institute of Technology living wage calculator, the income required to raise three kids in a household with two working adults in Arlington County is $92,480. [MIT]

Arlington Flyover Today — There is a flyover scheduled around 1:15 p.m. today in support of a funeral at Arlington National Cemetery. [Twitter]

Where to Find Singing WBJ Staffers — The Continental Beer Garden in Rosslyn and Westover Beer Garden in Westover are among the 15 best beer gardens in the D.C. area, according to the Washington Business Journal. The former is “a popular happy hour spot for WBJ staffers, who are known to sing along to the tunes playing on the outdoor speakers and share an order of pretzels and beer cheese dip.” [Washington Business Journal]

Arlington Pet Adoptions Up — “In 2017, we did a record number of adoptions for [the Animal Welfare League of Arlington], with 1,366 pets adopted. So far this year, we have already beaten that number, with 1,450 pets adopted.” [Twitter]

Halloween Stores Now Open — If you’re looking for a Halloween costume, there are three Spirit Halloween stores now open in the area, although none are in Arlington. For something closer to home, Total Fright in the Crystal City Shops (known as Total Party other times of the year) is also selling costumes and decorations. Meanwhile, a Christmas store is now open in Tysons. [Tysons Reporter]