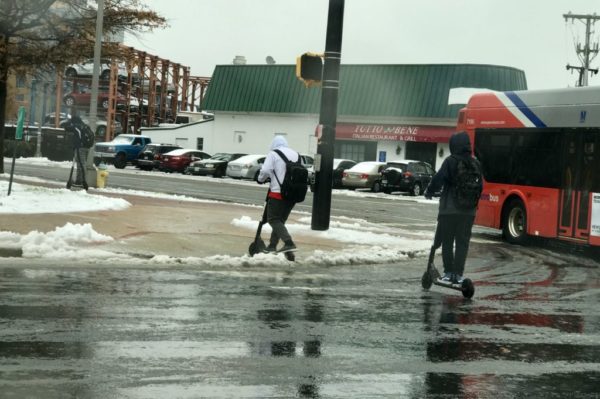 (Updated at 3:35 p.m) After a controversial on-time start that led to a treacherous morning on local roads and sidewalks, Arlington Public Schools is not taking any chances tonight.

Both parents and school bus drivers had trouble getting to school this morning on the roads. According to an APS spokesman, 12 out of around 160 school buses became stuck due to slippery road conditions, and one bus was involved in a “very minor” crash. The spokesman did not have an exact tally of how many buses were late arriving to school

“Our drivers are instructed to drive slow and take all precautions when driving,” said Frank Bellavia.

Following the morning mess, APS canceled all after school and evening activities. The school system announced the cancellations in a tweet just after 1:30 p.m.

If you can, please try and pick up your children at Extended Day early. https://t.co/P94XWBunQ8

Marymount University, meanwhile, is also closing early because of the weather.

Due to inclement weather, Marymount University will close at 4:00 p.m. on Thursday November 15th. All classes after 3:30 p.m. are cancelled. All evening activities are also cancelled.

While most of the frozen precipitation is over for Arlington, there are still a number of concerns for this evening, including remaining snow on local roads and a possible re-freeze overnight.

A mixed bag of precipitation is affecting much of the Commonwealth Thursday, and Virginia Department of Transportation (VDOT) crews are responding to adverse road conditions where needed. Snow, sleet, and heavy rain are expected across Virginia through the afternoon and overnight hours.

Some portions of Virginia are experiencing the first taste of winter in the 2018-2019 season. In affected regions, VDOT crews are deployed to treat roads to melt icy areas. Icy conditions could cause downed trees and debris in roadways. Travelers should exercise caution during the afternoon rush hour and overnight, as road conditions may be wet and slushy.

Portions of the state are experiencing heavy rain. Crews are monitoring road conditions and responding to reports of high water and debris in roadways.

Motorists are encouraged to closely monitor travel conditions in local areas and adjust travel as needed. In wet and icy conditions, allow extra time to reach destinations, lower speed and keep a safe distance from other vehicles.

Another concern: the potential for flooding as a result of melting snow and heavy rain. Arlington and much of the rest of the region is currently under a Flood Watch.

…FLOOD WATCH REMAINS IN EFFECT THROUGH THIS EVENING… THE FLOOD WATCH CONTINUES FOR * PORTIONS OF MARYLAND, THE DISTRICT OF COLUMBIA, AND VIRGINIA, INCLUDING THE FOLLOWING AREAS, IN MARYLAND, ANNE ARUNDEL, CALVERT, CENTRAL AND SOUTHEAST HOWARD, CENTRAL AND SOUTHEAST MONTGOMERY, CHARLES, PRINCE GEORGES, SOUTHEAST HARFORD, SOUTHERN BALTIMORE, AND ST. MARYS. THE DISTRICT OF COLUMBIA. IN VIRGINIA, ARLINGTON/FALLS CHURCH/ALEXANDRIA, FAIRFAX, KING GEORGE, PRINCE WILLIAM/MANASSAS/MANASSAS PARK, SPOTSYLVANIA, AND STAFFORD. * THROUGH THIS EVENING * A PERIOD OF MODERATELY HEAVY RAIN IS EXPECTED THIS AFTERNOON AND EVENING. ONE AND A HALF TO TWO INCHES OF RAIN IS EXPECTED WITH ISOLATED HIGHER AMOUNTS POSSIBLE. THIS MAY LEAD TO FLOODING OF AREA CREEKS AND STREAMS AS WELL AS IN URBAN AND POOR DRAINAGE AREAS. PRECAUTIONARY/PREPAREDNESS ACTIONS… A FLOOD WATCH MEANS THERE IS A POTENTIAL FOR FLOODING BASED ON CURRENT FORECASTS. YOU SHOULD MONITOR LATER FORECASTS AND BE ALERT FOR POSSIBLE FLOOD WARNINGS. THOSE LIVING IN AREAS PRONE TO FLOODING SHOULD BE PREPARED TO TAKE ACTION SHOULD FLOODING DEVELOP. &&