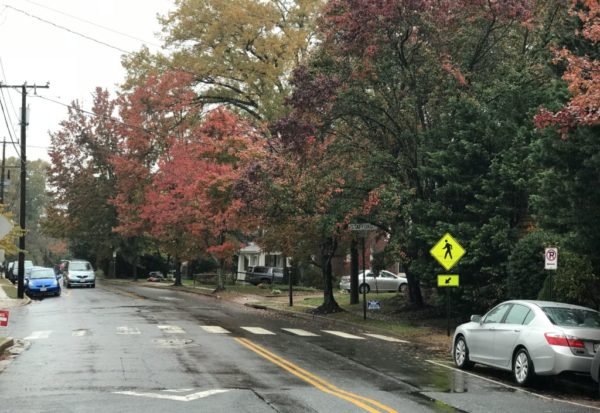 Reminder: Yellow Line Shutdown Starts Today — There will be no Yellow Line service today through Sunday, Dec. 9 as Metro works to repair the Yellow Line bridge over the Potomac. Yellow Line riders can instead take the Blue Line and/or free shuttle service. [ARLnow, Twitter]

New ‘Clarendon Circle’ Traffic Restriction — Work on improvements to the busy “Clarendon Circle” intersection are underway and have resulted in at least one traffic pattern change. During construction, drivers will not be allowed to make the “tricky” left from eastbound Washington Blvd to Clarendon Blvd, and will instead have to follow a detour via N. Kirkwood Road. [Twitter, Arlington County]

Civ Fed Prepares Tree Canopy Resolution — “The Arlington County Civic Federation in December will weigh in on the development plan of Upton Hill Regional Park and, more broadly, on Arlington government policies on retaining or removing trees during redevelopment on public land. A resolution demanding a temporary halt to current development plans at Upton Hill was introduced at the Civic Federation’s Nov. 13 meeting and will be debated and voted on Dec. 4.” [InsideNova]

Minor Bluemont House Fire — Firefighters extinguished an out-of-control fire in the fireplace of a Bluemont house Saturday night. No injuries were reported but the home, on the 900 block of N. Frederick Street, suffered some smoke damage. [Twitter, Twitter]

Another Traffic Nightmare at DCA — As if the gridlock caused by the Veterans Day shutdown of the National Airport Metro station wasn’t bad enough, the traffic nightmare repeated itself Sunday evening, during one of the busiest travel days of the year. Some drivers reported spending hours trying to get to and from the airport. [NBC Washington, Twitter]

CBS Looks at Clarendon’s Vpoint Apartments — On Saturday morning, CBS News took a close look at the vPoint affordable housing project in Clarendon. The project, which converted a stand-alone church to a combination worship space and apartment building, is potentially a model for other communities struggling with affordable housing. At the time, however, the redevelopment faced lawsuits and other community opposition. [YouTube]

Amazon News Roundup — Arlington saw only modest successes in its quest to pitch itself as a tech hub over the past few years, but Amazon’s arrival changes that narrative in a big way. That said, half of the jobs Amazon brings to Arlington will be non-technical. Meanwhile, Amazon may benefit lower-income residents in New York City more than in Arlington, as subcontractors in New York will be subject to the state’s $15 per hour minimum wage; Virginia’s minimum wage is currently the federal $7.25 per hour minimum. And Nashville, some say, will be the biggest winner in terms of Amazon’s new presence boosting the local commercial real estate market.