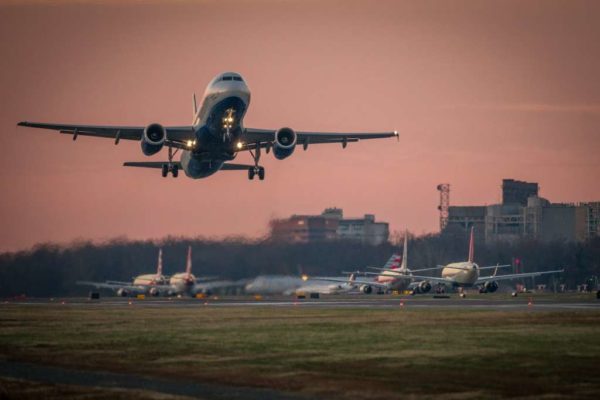 Amazon may be bringing thousands of new workers and a spate of new businesses right to the doorstep of Reagan National Airport, but don’t expect to start hearing too many more planes soaring over Arlington anytime soon.

At least, that’s the word from county leaders, airport officials and the airlines themselves. Despite the tech giant setting up shop right across from the airport in the newly dubbed “National Landing,” all parties involved believe that DCA is a bit too crowded to start welcoming passengers bound for the new headquarters.

“We’re really a constrained airport in terms of size, gate availability and runway capacity,” Andrew Trull, a spokesman for the Metropolitan Washington Airports Authority, told ARLnow. “We just are not anticipating more flights heading toward Reagan.”

The potential for an increase in aircraft noise is just one of many concerns raised by county residents in the wake of Amazon’s big announcement last month, particularly because people in a variety of Arlington neighborhoods have already complained of planes bound for DCA keeping them awake at night. Reagan has also seen a surge in traffic in recent years, prompting all manner of county officials to try and take action on the issue.

But Trull points out that DCA is one of several airports around the country where the Federal Aviation Administration closely regulates how many planes pass through each year, a process known as “slot control.”

That leaves it up to Congress to determine if DCA is even allowed to welcome more aircraft in the first place, likely through an appropriations bill for the FAA. Lawmakers just passed the first such funding “reauthorization” legislation for the agency in six years this fall, and United Airlines spokeswoman Kimberly Gibbs points out that Congress “rejected any changes to this important rule” governing air traffic limits at DCA in the new bill.

While Gibbs added that she believes United is “uniquely positioned to serve these communities as they capitalize on the exciting opportunities that are headed their way,” she also didn’t have any service changes to announce.

Spokespeople for both Southwest Airlines and Alaska Airlines, another pair of carriers offering a bevy of flights between DCA and Amazon’s Seattle home, also said the companies weren’t planning any service increases at this time. Representatives for the other airlines serving DCA didn’t respond to requests for comment.

However, that’s not to say that Amazon’s arrival won’t prompt any changes at National. Though the number of flights may not increase in the coming years, Trull said it is possible that airlines could start flying larger planes into DCA to keep pace with rising demand.

For instance, airlines could replace smaller, regional jets on certain routes with much larger planes instead, a change that Trull says would be allowed under the “slot” rules.

Executives with American Airlines have even begun publicly discussing such a possibility in recent days, and kicked off discussions with Amazon officials about which routes employees might start choosing as the company moves to Arlington.

Of course, Trull notes that any airline looking to expand at National should consider that airport was designed to serve 15 million passengers a year, but currently welcomes about 24 million annually. That’s helped prompt the airport’s major “Project Journey” renovations, which will ultimately eliminate the infamous regional gate “35X” in favor of new, dedicated space for those flights.

“A lot of people are wondering if it will add capacity, but the answer is ‘No,'” Trull said. “We see it as an improvement to the passenger experience… because we’re already dealing with so many people.”

Instead, the biggest beneficiary of Amazon’s arrival may well be National’s sister airport: Dulles International.

Trull points out that the MWAA has specifically worked to make Dulles “more competitive” in recent years, including major renovations to the airport and the (still ongoing) extension of Metro’s Silver Line to reach Dulles. Accordingly, he sees the Loudoun airport as the region’s “primary growth airport with upside potential” now that Amazon is in town.

Gibbs adds that Dulles will indeed be the main place that United ramps up service in the coming years, particularly because it offers international flights that will likely be attractive to a global company like Jeff Bezos’ bunch.

“One of the criteria Amazon raised with us was the proximity to the airport, but also to the two other airports in this region, with that benefit of global accessibility specifically,” Alex Iams, assistant director of Arlington Economic Development, said during a Dec. 6 question-and-answer session on Amazon.

Yet Arlington still seems set to benefit from Amazon-related visitors in one key way: new hotel bookings. Even if the tech company’s staffers won’t be spurring a flurry of new business at National, county officials do project that many visitors will opt to stay near the new headquarters.

In fact, they’ve even structured the county’s incentive package for Amazon around that expectation — Arlington plans to hand the company grant money that will be drawn solely from any increase the county sees in hotel tax revenues.

“We’re going to be seeing between 125,000 and 150,000 hotel nights coming into the market each year,” said Victor Hoskins, director of Arlington Economic Development. “I talk to our hotel owners and they’re delighted, they can’t believe it.”