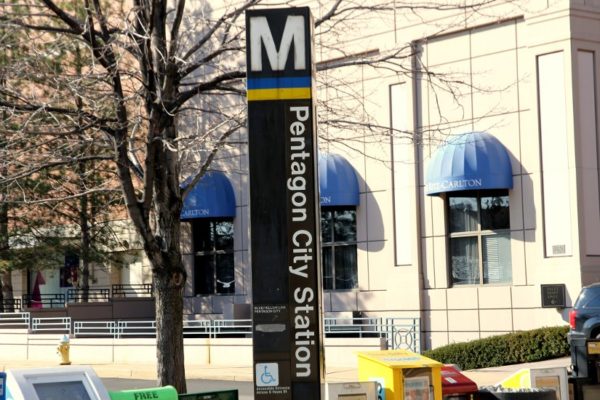 To combat growing concerns about how Amazon’s new influx of workers might put a strain on Arlington’s congested roads and Metro’s troubled rail system, county leaders are increasingly embracing the same argument — so many people have left Crystal City and Pentagon City over the years that the area’s transit network is ready to welcome new residents.

There’s little doubt that the 25,000 workers Amazon plans to eventually bring to the region will have an impact on commute times for drivers, and crowd more people onto local trains and buses. But Arlington officials stress that they already planned to move plenty of people through and to the newly dubbed “National Landing,” only to see thousands of federal and military employees flee the neighborhood years ago.

“Transportation system utilization is reflective of building occupancy,” county transportation director Dennis Leach said during a question-and-answer session live streamed on Facebook yesterday (Thursday). “We’re down about 24,000 jobs and we see it on the rail system, we see it on the roads… so we have that capacity, we just have to get people to use [these options].”

Leach points out that Crystal City has been hardest hit in recent years, particularly by the Base Realignment and Closure process. He noted that he “had to go back to 1986 to find a lower annual passenger count” at the neighborhood’s Metro station; for Pentagon City, he had to go back to 2001.

Similarly, Leach said that traffic volume on Crystal City and Pentagon City roads is “down 20 percent since 2000,” another “reflection of lower employment” in the area. He believes there’s even ample parking available, despite some neighbors’ concerns to the contrary, arguing that the neighborhoods’ “parking assets are incredibly underutilized.”

That being said, Leach admits that the county would much rather see Amazon’s new arrivals using public transit, and the county has some “work to do” in that department. Metro presents a particularly thorny challenge for leaders — even if stations in the “National Landing” area aren’t seeing as many riders as they once did, the rail service is still trying to improve its safety and reliability after years of struggles.

But Lynn Bowersox, Metro’s assistant general manager for customer service, communications and marketing, believes that the agency is moving in the right direction in solving those problems. She’s particularly enthusiastic about General Manager Paul Wiedefeld’s budget proposal for the 2020 fiscal year, which would see Metro return to running nothing but eight-car trains and even expand its “Rush Hour Promise” program to offer more refunds to commuters for lengthy rides.

“I think the capacity is really going to be there as these jobs come to Arlington,” Bowersox said. “Especially with these improvements we have in the pipeline.”

Of course, it’s no guarantee that Wiedefeld will win all those promised changes from Metro’s governing board. The full suite of service improvements Wiedefeld is calling for come with a hefty price tag, and Arlington officials have cautioned that they may not be able to afford everything Wiedefeld is asking for. The new budget could end up costing the county another $8 million per year, a particularly worrying prospect for county leaders, given Arlington’s existing budget pressures.

With or without those enhancements, however, Bowersox is confident that Metro’s safety and reliability improvements will be enough to win Amazon employees over.

“We believe in our reliability and we’re standing behind it,” she said.

Leach is optimistic about as well about the state’s planned investments to help the county build its long-planned second entrance at the Crystal City Metro station, making it even more accessible to both Amazon’s future office space and the rest of the neighborhood. The state will also help Alexandria fund another entrance at the soon-to-be built Potomac Yard station, even though funding concerns initially convinced leaders to cancel the project.

Yet officials also recognize that the area is still not as walkable, or accessible for cyclists, as it could be. That’s due in large part to Route 1, which Leach points out acts as a “divider” between Pentagon City and Crystal City with its large, elevated sections of highway.

The state and county are both planning on spending $250 million on Route 1 improvements, but they haven’t identified the exact source of all that money, or even what the improvements will be. Generally, Leach does hope that the change help “knit the Crystal City and Pentagon City neighborhoods together,” and that will likely mean bringing the highway down to the same grade as the rest of the street network.

Renee Hamilton, deputy administrator for the Virginia Department of Transportation’s Northern Virginia District, said that officials only have a “broad concept” for what those changes will look like, and are still discussing the exact timeline for how the project will move forward. But, like Leach, she does expect that substantial changes are in the offing.

“It’s very difficult to get from one side of Route 1 to another,” Hamilton said. “So we’re going to look at creating a boulevard feel to it, which will likely require us to lower some of the roadways.”