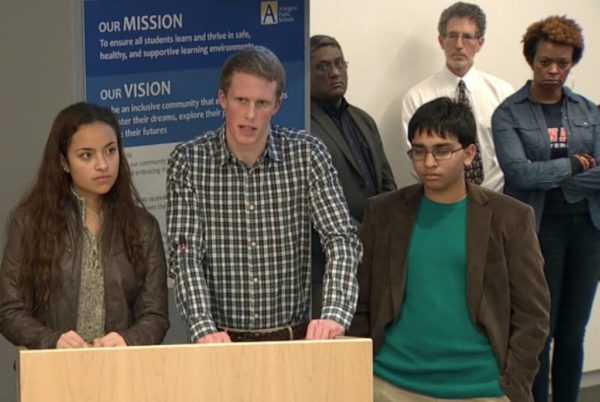 Though the process of renaming Washington-Lee High School has been marked by controversy and acrimony at every turn, the vast majority of those involved in the effort to find a new name for the building are reassuring school leaders that they’re ready to see some action on the issue.

The School Board is gearing up for a vote on a new name for the school next month, putting an end to a process that kicked off in earnest in September 2017. But between a lawsuit challenging the decision to strip Robert E. Lee’s name from the building, and accusations of misconduct surrounding a committee convened to come up with name suggestions, the Board’s faced its fair share of headaches leading up to that momentous meeting.

At the Board’s meeting last night (Thursday), however, members of the renaming committee sought to convince officials that their work to find a new moniker for Washington-Lee was thorough, thoughtful and fair.

While roughly a dozen people still spoke in opposition to the name change, most participants in the renaming process told the Board that they’d done their due diligence in proposing new name options and are ready to see a final decision.

“I’ve been part of bringing together stakeholders in Congress, the EPA, all sorts of places… and this was one of the best processes I’ve seen put together,” said Nikki Roy, who represented the Lyon Park Citizens Association on the naming committee.

The committee’s final recommendation was that the Board name the school “Washington-Loving High School” to commemorate Richard and Mildred Loving, the Virginia couple who successfully challenged the state’s ban on interracial marriage before the Supreme Court. A close second choice was the more generic “Washington-Liberty High School,” which committee members also presented supporting materials for Thursday.

Board members generally didn’t tip their hands on which option they might end up favoring in the end, instead using the meeting as a chance to better understand how the committee conducted its deliberations.

Committee members were certainly quick to acknowledge that the process got heated at times — three representatives ended up resigning from the committee by the time its work was completed, largely over complaints that they were pushed by Arlington Public Schools officials to ignore community feedback urging them not to change the name.

“Instead of honoring these opinions, we were told to dismiss them,” said Julia Crull, a representative of W-L alumni on the committee who eventually resigned from the group. “It should send a message to you when three people out of 21 members resigned for the same reason; we could no longer represent those we were chosen to represent.”

Yet Allan Gajadhar, a representative of the Cherrydale Citizens Association on the committee, stressed that the group did give weight to those views. However, he reiterated that the committee kept coming back to the fact that the Board had already decided to change the name, and it wasn’t within the group’s purview to overturn that decision.

John Holt, a senior at W-L serving on the committee, added that his surveys of current students found that “very few” cared about keeping Lee’s name on the building. While older alumni have largely led the charge to preserve the Confederate general’s name on the school, Holt said maintaining the school’s acronym was more important to most of his peers.

“Almost everyone wanted to keep W-L, but not many wanted Washington-Lee,” Holt said.

Thornton Thomas, a W-L freshman on the committee, also said that some of his classmates remained a bit confused about the “rationale” of changing the name in the first place. Though the Board’s discussions of the name change, kicked off in the wake of the white supremacist violence in Charlottesville last August, have attracted plenty of publicity, Thomas urged the Board to do a bit more outreach to students themselves about the process.

However, all involved seemed quite satisfied with the committee’s eventual recommendations.

Board member Barbara Kanninen questioned why the committee opted against advancing the recommendation for “Washington-Lincoln,” even though the option did become one of the group’s top five suggestions. In particular, she suggested that there was a “bit of incongruity” in matching Washington with either a pair of more contemporary figures or an abstract concept like “Liberty.”

But committee members argued that the Lovings proved to be an attractive option particularly because they weren’t as “heroic” as someone like George Washington.

“It was that humility, that lack of heroic statue that lends the gravity and weight to what they did and achieved,” Gajadhar said. “These were people just trying to live their own lives and be happy, yet they had a significant impact on us. It wasn’t necessarily symmetrical, but I consider it quite balanced.”

Some Board members expressed some consternation that embracing the “Loving” name might make it a bit difficult for the school to maintain its current mascot: the Generals.

But W-L Principal Gregg Robertson assured the Board that staff and students were already brainstorming ways they might change the school’s mascot, or even colors (currently blue and gray). Because the committee was anxious to see the “W-L” acronym remain, Robertson added that he was optimistic that any name change wouldn’t prove to be too disruptive otherwise, allowing the school to leave many signs and murals untouched.

Nevertheless, the proposed new names certainly won’t make everyone happy. Many W-L alums remain frustrated with how the Board managed the renaming process, and pledged to keep working to block the change ahead of the Board’s Jan. 10 vote on the matter.

“You violated my trust as a parent, and as a voter who helped put you on the board to represent me,” Toni DeLancey told the Board. “Simply stop this illegitimate process. Let’s start over and listen to the community.”

END_OF_DOCUMENT_TOKEN_TO_BE_REPLACED

More Stories
Flying Colors: The Journey We Have TakenAWLA Puts Out Call for Foster Parents Willing to Provide a ‘Home for the Holidays’