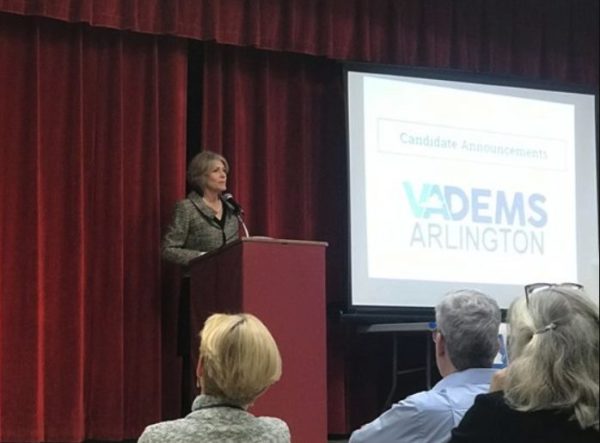 Commonwealth’s Attorney Theo Stamos has officially kicked off her bid for re-election, looking to rebuild bridges among her fellow Democrats after repeatedly endorsing independent John Vihstadt and drawing a primary challenger from her left flank.

Stamos emphasized that she’s “been a Democrat since I was holding up signs for Hubert Humphrey on the south side of Chicago” in a speech announcing her run for re-election last night (Wednesday) at the county Democratic committee’s monthly meeting.

The county’s top prosecutor has ruffled plenty of feathers among party leaders in recent years, becoming one of just three elected Democrats in Arlington to back Vihstadt’s independent bids for County Board.

And with Parisa Tafti (a former public defender who’s served in leadership roles for the local Democratic party) hoping to win the party’s nomination for the post this June, Stamos began her campaign on a bit of a conciliatory note. After all, the committee threatened to boot County Board member Libby Garvey out of the group over her support for Vihstadt, leading her to briefly resign instead.

Accordingly, Stamos primarily cited her long history with the entire Vihstadt family in explaining her support for the independent, who won a pair of elections in 2014 to become the first non-Democrat on the Board since 1999. Vihstadt lost his bid for re-election last year to Democrat Matt de Ferranti, returning the Board to one-party control.

Stamos regaled the audience with memories of relying on the Vihstadts, her neighbors for years, to look after her kids as they were growing up. She says her family and the Vihstadts still celebrate holidays together, making her backing of his candidacy as personal as it was political.

“Back in 2014, when John asked, and again last year, if I would support him, I wasn’t going to say to him, ‘You know, I’ll support you privately but I can’t do it publicly,'” Stamos said, according to a video of the event posted on the Democratic blog Blue Virginia. “I didn’t want to do that. And, as President [John F.] Kennedy once said, and it’s an important thing to remember, ‘Sometimes party loyalty asks too much.’ And my support for John was one of those times.”

However, Tafti has so far chosen to base her challenge to Stamos on policy disputes, rather than any party infighting. She claims that Stamos, who was first elected in 2011, has been insufficiently committed to reforming the county’s criminal justice system, and even exacerbated some of the system’s racial disparities.

“Safety is justice and justice is safety,” Tafti said Wednesday night in formally announcing her own campaign. “In Arlington, it is long past time that we start leading on this issue.”

Tafti, who recently won the backing of former Gov. Terry McAuliffe, has pledged not to seek the death penalty if she’s elected in Stamos’ stead, and to end the practice of requesting cash bail for all criminal defendants. Stamos has pledged to end cash bail for most defendants accused of misdemeanors, but both Tafti and other local public defenders believe that change doesn’t go far enough.

Tafti also took aim Wednesday at Stamos’ relationship with local legislators, arguing that they need “an honest partner who understands, even outside of campaign season, the need to support policies important to Democrats” in order to pass criminal justice reforms at the state level.

She specifically singled out Stamos’ comments to ARLnow back in June for criticism, after Stamos dismissed a letter by the state’s legislative delegation urging her to do away with cash bail entirely.

“When our delegation seeks my help to reform the bail system, I shall do so with an open mind, not dismiss the request as ‘silly’ and ‘misguided,'” Tafti said.

But Stamos also took some time to defend her record heading up the prosecutors’ office in her kickoff speech, claiming she’s “led our office on a set of values that any Democrat would support.”

“I’m proud to say that, as of last Friday night, the inmate population in the Arlington County jail is the lowest it’s been in the past five years, and that’s not by accident,” Stamos said. “It’s because of smart policing and smart prosecution, because of innovations that I’ve supported and championed.”

She also pointed to her decision to not seek jail time for people convicted of their first marijuana-related offenses as a move toward reform, and her embrace of diversion programs to keep people struggling with addiction or mental health issues out of jail.

“The core mission of our office will always remain the same: the principled prosecution of criminal defendants, the vigorous protection of victims’ rights and never losing track of the public’s and community’s safety,” Stamos said.

Unlike Stamos, de la Pava did not address her support for Vihstadt in her speech. She has yet to draw a challenger this year, and has never run a contested race for the post — she was appointed to replace retiring treasurer Frank O’Leary, then won a special election and general election in consecutive years to retain her role.

School Board Chair Reid Goldstein also used the meeting as a chance to announce his bid for a second term, as he hopes to once more win the party’s endorsement for the nominally nonpartisan role.

Only one seat on the Board is up for grabs this year and Goldstein has yet to face any challengers in the race, though he has attracted some criticism for his handling of the controversial process of drawing new boundaries for eight South Arlington elementary schools last year.

Nevertheless, Goldstein used his speech as a chance to present the school system’s challenges as issues arising from the quality of county schools.

“These are tough issues, but we have to be in a situation where people aren’t eager to leave our schools,” Goldstein said.

The committee is set to select a Democratic School Board nominee in a caucus sometime in May or June. A June 11 primary will decide the other races on the ballot this year.

Next
Just Listed in Arlington