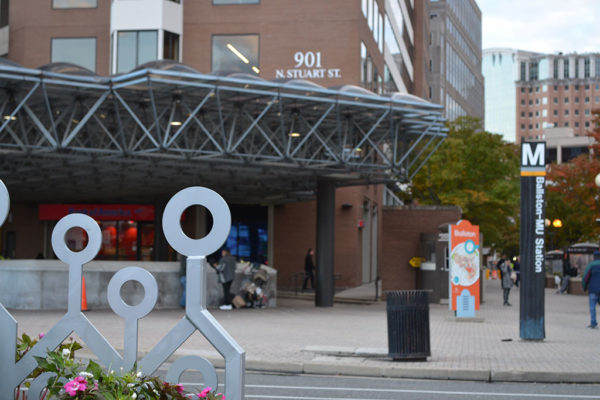 Some local developers are now set to hand over more than $6.8 million to help the county afford a second entrance to the Ballston Metro station, a project officials have hoped to finish for years in order to open up access to the subway stop for people living and working along N. Glebe Road.

The newfound cash stems from the long-stalled redevelopment of an office building at 4420 Fairfax Drive, which sits above the county’s planned spot for the new Metro entrance. The project’s backers are now offering up the money to help fund the entrance’s construction, in exchange for the County Board agreeing to extend deadlines for the redevelopment through end of 2022.

Originally, development firm JBG Smith was backing the project, known as “the Spire at Fairmont,” and it planned to build a new Metro entrance station at the same time as it constructed a new mixed-use building on the site. But that effort languished for close to a decade, and JBG sold the property to its current owners — Washington Capitol Partners, Kettler Development and Bognet Construction — in 2015.

That group has made little progress, however, and the “site plan” the county approved governing the redevelopment effort is rapidly nearing its July 2020 expiration date. Accordingly, the developers are looking for an extension, and negotiations with the county heated up earlier this year.

As part of that back-and-forth, Arlington officials told the developers that they weren’t interested in waiting for the new, 23-story structure to be built before moving ahead with the Metro entrance project. Instead, they asked for a simple cash contribution, and the companies eventually agreed, according to a staff report prepared for the County Board.

“The county has decided that it may be prudent to proceed on its own with the complete design and construction of the Ballston West Entrance… which would be more efficient considering differing time frames for completion of the developer’s project and transit improvement,” staff wrote.

Some of that urgency stems from the fact that Arlington previously won about $26 million in state funding for the project, but has yet to spend much of it. Officials don’t see any imminent threat that the funding could be “clawed back,” but are nonetheless anxious to show some progress on the project.

In general, it’s been tough sledding for the county to find any cash to power the construction in recent months.

Arlington was counting on regional transportation dollars to kickstart the project, asking for $72 million from the Northern Virginia Transportation Authority to wrap it up. But the group declined t0 hand out any cash for it — after losing out on tens of millions as part of the vagaries of the deal to provide dedicated funding to Metro — and Arlington was forced to push back its plans for the entrance by several years.

Any timeline for the project is still murky, however. The staff report notes that JBG paid an engineering firm to prepare some designs for the new entrance, but those plans were never “accepted by WMATA or the county.” The new developers have taken control of those plans, and if the county finds they’re up to snuff, Arlington officials could agree to reduce the cash payment they need to pony up.

The developers are also set to send the county just under $410,000 to secure some other zoning changes to allow construction to move ahead. Current plans call for 237 apartments and 9,200 square feet of retail space to be built on the site, in addition to a garage with 237 parking spaces.

The County Board is scheduled to sign off on the details of this deal at its meeting Saturday (March 16). The matter is slated to be considered as part of the Board’s consent agenda, which is largely reserved for noncontroversial items approved without debate.