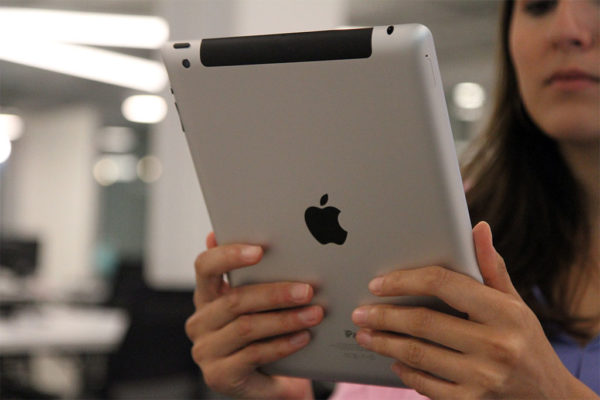 A new study indicates most Arlington Public Schools staff and students find personal electronic devices helpful in the classroom, but School Board members say questions remain about an initiative to give iPads and laptops to students.

Dr. Shaun B. Kellogg of the Friday Institute of NC State University, which conducted the “1:1 Digital Device Initiative Study,” said teachers and students surveyed were “generally pretty positive” about devices, but that “parents who completed the survey were clearly more skeptical of the benefits.”

“In fact the results from parents were kind of polarizing,” Kellogg said.

Eighty-five percent of teachers and 75 percent of students reported that the MacBook Air laptops and iPads used in APS classrooms can make learning more interesting — but only 55 percent of parents surveyed agreed.

Last year, the Friday Institute began studying the impact the devices had on students and teachers and presented these initial results based on analysis of the quantitative data gathered over the last year. Data was collected via interviews, 410 classroom observations, survey responses from 882 teachers, 8,519 students, and 1,693 parents, per Kellogg’s presentation last week.

“I think in simple kind of parent speak we really want to know if what we’ve invested in is of benefit to their children,” said School Board member Nancy van Doren, who acknowledged that Kellogg was likely unable to answer that question during this first phase of his research.

Board Chair Reid Goldstein said the Board will revisit the issue in May.

Officials acknowledged during the meeting that the second phase of the study is not expected to be completed by May.

Goldstein said the study to examine the “the cost benefit analysis” of the program, but noted he had hoped the presentation included information on the “health effects” more screen time could have for youth.

Board member Barbara Kanninen also asked if there exists a consensus in the educational community about one-to-one device programs.

When pressed by Kanninen on whether APS has good quality instruction and curriculum Kellogg said, “I’d be very comfortable making that conclusion after phase two. That is one of my goals, figuring that out.”

Proponents of the program have said providing an iPad or laptop for every student from second grade on offers a chance to personalize their learning and address the achievement gap. But the program remains controversial with parents, some of whom were recently billed the costs for repairing devices after a policy change last year.

Board member Monique O’Grady also asked last week if it is common for school districts to have a device for every student.

Kellogg referenced his work in North Carolina where he answered that about 40 percent of their schools have “officially” adopted a similar policy but “realistically” only about 20 percent of them have achieved a one-to-one ratio.

In 2015, Kanninen attempted to pause and study the program, which had deployed 3,000 devices at the time. Her questions four years ago echoed last week’s: “Is it helping students learn? Is it helping teachers teach?”

The initiative began toting iPads and MacBook Air laptops into classrooms in the 2014-2015 school year with the goal of outfitting every student with a device by 2017.

The program initially drew criticism from parents who said APS introduced it in the budget with little public input and without sharing details about the plan with parents.