(Updated at 10:45 a.m.) Arlington Public Schools may shuffle nearly a quarter of its elementary school students around to combat the county’s persistent overcrowding problems.

The Arlington School Board is expected to take action on one of two final proposals during its meeting on February 6, 2020. If approved, it would take effect for the 2021-22 school year, per APS spokesman Frank Bellavia.

“Some of our schools can’t manage the student’s lunch time, we have students who eat lunch as early as 10 a.m. and as late as 2 p.m.,” said Lisa Stengle, executive director for the APS Department of Planning and Evaluation.

The first proposal idea APS shared with parents would mean: 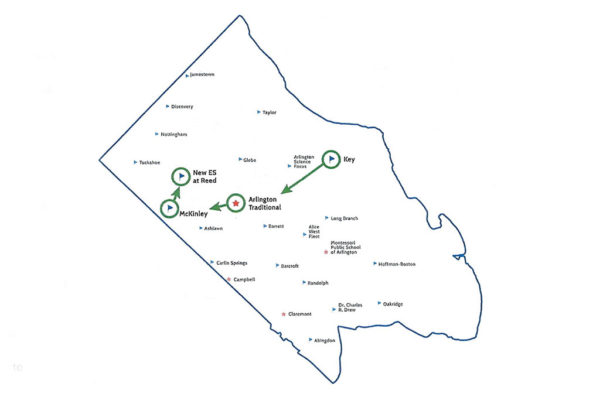 According to officials, 40% of McKinley students live in the Reed School walk zone, meaning more students who are currently riding the bus would have the option to walk to school. In addition, it would provide 100 additional seats for new ATS students.

The second proposal calls for the same McKinley, Reed, and ATS switches, plus: 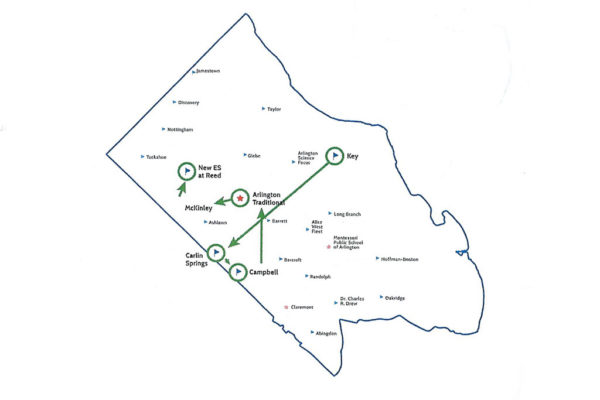 Both plans are expected to affect some 20-30% of Arlington elementary school students.

“[Moving schools allows] APS to use all schools to maximum capacity, keep together as many students in each school community as possible, and keep as many students as possible walking to their neighborhood schools,” officials said in a press release.

The proposals are a larger part of the APS Elementary School Planning Project, which calls for the planning of capacity solutions as Arlington’s elementary student population is expected to exceed 30,000 by 2023 — with significant growth in the Rosslyn, Ballston, and Columbia Pike areas.

The fiscal impact of either proposal remains to be determined, according to APS Transportation Planning Director Kristen Haldeman.

Alternatively, per the planning website, if APS chooses to only redraw elementary school zoning districts without moving schools, it would affect up to 41 percent of Arlington’s elementary school population and incur additional transportation costs.

In addition, Spengle noted the county will need to build up to three new elementary schools by 2029 in order to accommodate growth, including in and around Pentagon City.

The school system will spend the next several months collecting community feedback before the School Board makes a final decision, with public meetings on:

Several community forums are also scheduled for December, plus a School Board public hearing on January 30 at 7 p.m. in the Syphax Education Center.

The discussions come after APS redrew the boundaries of eight elementary schools last year in order to accommodate the opening of Alice West Fleet Elementary School.