(Updated at 1:45 p.m.) Startups in Arlington and the D.C. area need to take “bigger swings” if the region hopes to become a tech hub like Silicon Valley.

That’s the message from a panel discussion hosted by DCA Live earlier this month at Marymount University in Ballston.

At the Big DCA Growth Summit, panels of investors, founders, academics and other innovators reflected on Arlington’s big Amazon HQ2 win and what might be ahead for the area.

Amazon’s presence, with its forthcoming office campus in Pentagon City and some 25,000 planned jobs, will help bring excitement and more business diversity to a local tech scene that’s heavy on government contractors and cybersecurity firms. 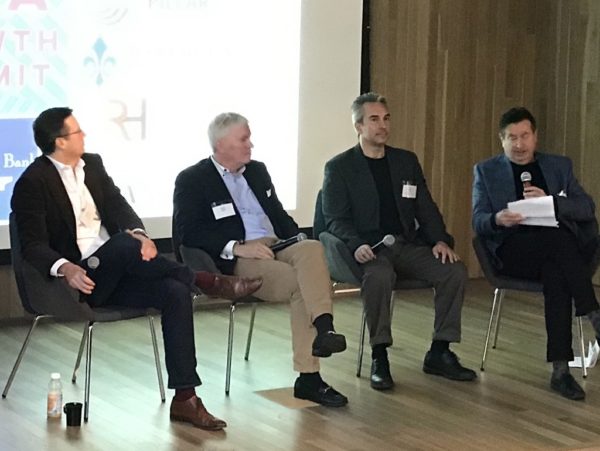 “I’m honestly convinced that Jeff Bezos was looking for a place that had less hype around it,” said Mark Walsh, a local angel investor. “D.C. is begging for more attention for the good stuff it does outside of the government.”

If Amazon could bring with it more of a West Coast tech mindset, panelists said, it could help the D.C. area better compete with Silicon Valley’s tech ecosystem and generate more billion-dollar “unicorns.” More big startup investment wins would, in turn, help fuel investments in more startups — a virtuous cycle.

“Too many companies in the Mid-Atlantic — the exits were good but only a couple hundred million dollars,” said Scott Frederick of Rosslyn-based Sands Capital. “We need to take bigger swings and get more billion dollar companies like Cvent and EVERFI. Entrepreneurs in this region should think bigger. In the Valley they go to restaurants and park next to Bugattis — it’s a different mindset.”

(There’s another argument to be made, however, for not running an otherwise healthy business into the ground in an effort to become a unicorn when it could be a profitable multi-million dollar company.)

Frederick said, as others have noted in the past, that there’s a bit of gap between seed funding for early startups and growth capital for more mature companies. Those seeking Series A and B rounds, between the seed and later rounds, sometimes struggle to find it from investors, hurting the region’s tech ecosystem. 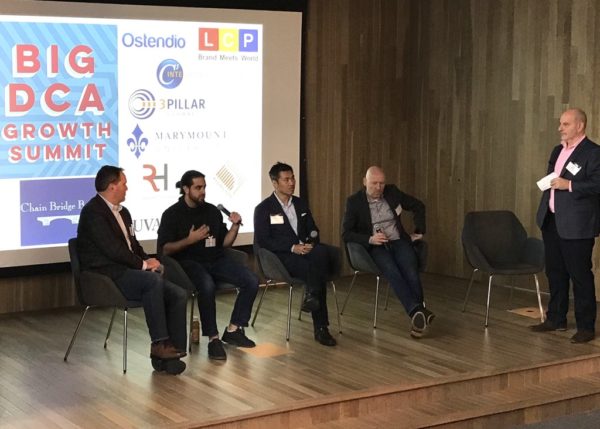 Funding hasn’t been a problem for at least one local startup co-founder, who recently raised $8 million, with more on the way. Eman Pahlevani, co-founder of Rosslyn-based catering marketplace Hungry, said that the affluent D.C. area is particularly good for those seeking early funding from angel investors.

“D.C. has one of the most robust angel communities. You can raise money fairly quickly in D.C. just by having relationships with angels,” said Pahlevani, who was also a cofounder of Livesafe. “If you’re successful here, word spreads quickly. It’s easier and quicker to raise money here than on the West Coast, and I’ve done both. I just think the opportunities here are immense.”

Another local asset: lots of people who are in a position to help local startups.

“Entrepreneurship is a contact sport,” said France Hoang, co-founder of Tysons-based BoodleAI. “As in, [personal] contacts. This is where my network was.”

Hoang said a key to bigger startup exits is finding fearless startup founders who can take risks and handle the dark “WFIO” moments that many startups experience — as in, “we’re f–ked, it’s over.” Pahlevani agreed.

“We’ve had our WFIO moments,” said Pahlevani, who added that part of startup success is in motivating one’s team and not lamenting the challenges. “There’s a lot of time spent building internal momentum, celebrating the smallest wins and building team momentum. Everyone working with you needs to believe it’s going to happen. Get your rocketship going. Get everyone on board.”

While entrepreneurs like Pahlevani have taken big swings and overcome their WFIO moments, the D.C. area is doing a better job of not punishing startup founders who do end up striking out.

“The Mid-Atlantic region is starting to realize that failure is not a black mark,” Walsh said, noting that noble failure is sometimes seen as a badge of honor Silicon Valley.

More business diversity — more consumer-oriented and B2B startups — could help improve the D.C. tech scene’s image and attract more companies, panelists said. One founder, Sean Griffey of D.C.-based Industry Dive, noted that media is a strength of the area that might be unheralded in the tech discussion.

The area “has a reputation of being a cybersecurity hub, but it’s also a media hub,” he said, citing an ecosystem of local companies like Morning Consult, Clarendon-based Axios, Rosslyn-based Politico and Vox. “That keeps us here.” 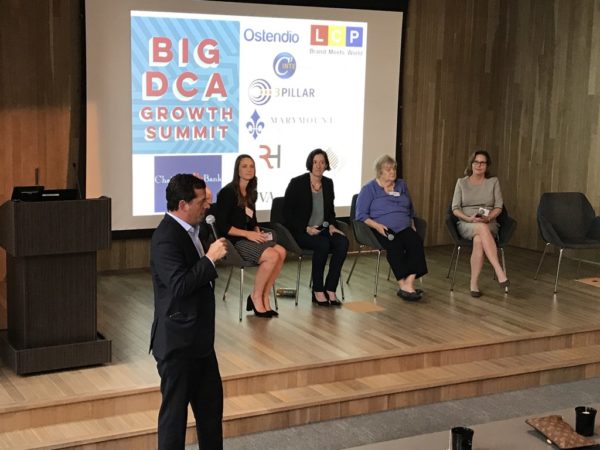 Another D.C. area asset is its institutions of higher education, which churn out a steady supply of ambitious young professionals for local employers.

Many are in the process of boosting their tech cred, particularly in Arlington, with Marymount University growing and emphasizing innovation; George Mason University expanding and building a new Institute for Digital Innovation in Virginia Square; and even the University of Maryland opening a “Discovery Center” in Crystal City. Just over the Arlington border in Potomac Yard, meanwhile, Virginia Tech is advancing plans for its new Innovation Campus.

Those schools could help produce new grads with tech skills but could also help re-skill older workers and those looking to re-enter the workforce — like formerly stay-at-home moms — said Marymount Professor of Information Management Diana Murphy.

One challenge with younger graduates, Murphy said, will be boosting D.C.’s image as a place to go after college for things other than government work.

“Students want to go someplace cool, like Austin, Texas,” she said. “D.C. is not seen as quite as cool because of the history of being associated with the government. Don’t just be a tech hub, be a cool tech hub.”

“But maybe the Nats winning the world series makes us cooler,” Murphy added. “We need to be cooler, people.”

Coolness aside, there’s another challenge that can hurt the region’s quest to be a Silicon Valley-level hub of innovation: innovators not being able to afford to live here due to high housing costs. (Though that has so far not mortally damaged the tech scene in the Valley, where real estate prices are through the roof.)

“Affordability is a huge issue,” said Jessica Hall, Vice President of Product Strategy for Fairfax-based software firm 3Pillar Global. “I see people moving to Richmond or Asheville [North Carolina] because they want to afford to raise a family.”

“Kids in daycare are expensive. These affordability issues are going to create a talent drain,” she said. Future CEOs, directors, etc. “need to feel they can stay here and afford kids.”