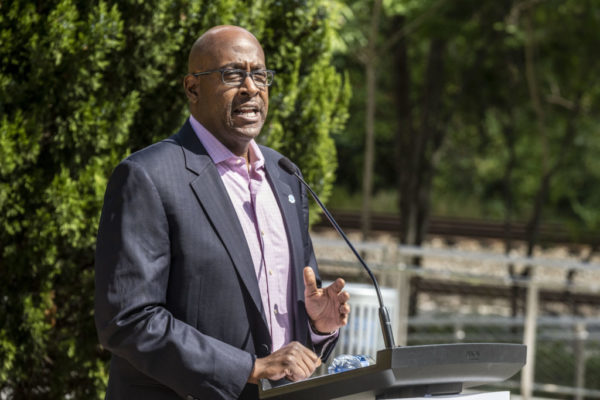 (Updated at 4:15 p.m.) Arlington County Board Chair Christian Dorsey says he should have, upon reflection, informed the community about his personal bankruptcy filing before November’s election.

Dorsey, who was sworn in for a second term last night, answered a series of questions from ARLnow about his bankruptcy, which was first reported by the Washington Post a few days after the election.

The Post reported in November that Dorsey, 48, “filed for bankruptcy last month after falling behind on his mortgage and accruing tens of thousands of dollars in credit card debt.” The paper noted that the bankruptcy filing came as Dorsey’s South Arlington home was facing possible foreclosure and as his wife dealt with health problems.

Questions have arose in the wake of the bankruptcy revelation. For one, given that the filing was made on Oct. 16, should voters have been informed prior to the Nov. 5 election?

Dorsey tells ARLnow that he now regrets not letting people know despite how personal the issue is for him and his family.

“In retrospect, I should have had a conversation with the community, no matter how difficult, when I filed for bankruptcy in mid-October,” Dorsey said via email Thursday evening. “I do believe, however, that I will demonstrate over the next four years that those who voted for me did not make a mistake.”

Dorsey was also asked about an assertion made by the bankruptcy trustee that he had not submitted his previous year’s state income tax return. Dorsey contended that he did, in fact, file his state taxes.

“I filed, yet I discovered at my bankruptcy hearing that the Commonwealth has no record,” he said. “I have resubmitted my 2017 filing.”

(By law, Virginia’s state tax office is prohibited “from providing information or commenting on specific taxpayer situations,” a spokeswoman said.)

Court documents show that Dorsey expects $5,000/mo in “other income” besides his annual County Board salary of just over $60,000. The bankruptcy trustee objected to that, writing that the $5,000/mo figure “has not been documented or verified.” Dorsey says that income comes from consulting work.

“I do policy and communications consulting,” he said. “I am not comfortable talking about my clients within the context of your article, but attest that they are exclusively 501(c)3 non-profits, political non-profits, philanthropic foundations and universities.”

“None are foreign entities,” Dorsey added. “None do business with Arlington County. None have given to my political campaigns.”

Dorsey’s most recent conflict of interest form filed with the Clerk of the County Board discloses outside work with a pair of firms that paid him more than $5,000 annually: KNP Communications and Upswing Strategies, both in D.C.

Though serving on the Arlington County Board is ostensibly a part-time job, Dorsey’s work for Arlington extends beyond the County Board dais to representation on a number of regional bodies. Dorsey serves on the Washington Metropolitan Area Transit Authority (WMATA) Board, is a commissioner on the Northern Virginia Transportation Commission (NVTC) and represents Arlington on the Board of Directors of the Metropolitan Washington Council of Governments (COG).

Dorsey’s disclosed pay from those organizations is limited to modest $50-150 per diems.

On Nov. 7 the WMATA Board stripped Dorsey of his finance committee chairmanship and forced him to repay a $10,000 campaign contribution, which he received from the transit system’s largest union, citing an improper delay in reporting the contribution.

Dorsey handily won reelection in November, after facing challenges from two independent candidates. His campaign’s top expense this year was $8,000, paid to his wife, for “campaign management and graphic design.”

Despite the bankruptcy and the WMATA Board controversy, Dorsey says he’s focused on his work on behalf of Arlington County residents.

“Voters returned me to office because of what I accomplished in my first four years on the County Board. My colleagues on the Board selected me to be their Chair this year because they appreciated the leadership and collaborative approach I exhibited during my first term,” he said. “That track record, and those skills, are the same today that they were before my personal financial issues became public earlier this month.”

“My personal financial issues do not in any way impinge upon my ability to work with staff and with our community to find practical, innovative solutions to all these issues,” Dorsey added. “I love this County, and I will continue to work hard to ensure it remains one of the greatest places on the planet to live, work and rear a family.”

The County Board is expected to decide in 2020 whether it should raise its own salary, up to $89,851 for a Board Member and $95,734 for the Board Chair — in line with the current Area Median Income.

While not blaming the current Board compensation for his financial problems, Dorsey said he supports higher pay for Board members. He provided the following statement to ARLnow.

I know that the fact that the Board must set its own salary cap and then its own raises rubs some people the wrong way – but that is the law.

As we have just heard, the Board last voted to set a salary cap in 2011. That cap took effect on Jan. 1, 2012, and the subsequent salary increases approved by the Board still have not quite reached the cap. So why reset the cap now?

Simply put, if the Board does not reset the cap at this meeting, the next time it can do so would be in 2023. By then, the salary cap will have been in place for 11 years.

For me, it is important that Board Member salaries be set at a level that would encourage Arlingtonians from all walks of life to consider serving on this Board. Serving on the County Board is, above all else, a privilege. But it is not, nor was it ever meant to be, a volunteer position. By tradition, but not by law or regulation, it has been considered a part-time position, even as the hours required of Board members have grown into something more closely resembling a full-time position and Arlington has grown into an increasingly urbanized, densely populated community with an annual operating budget that exceeds $1 billion.

But for me, the issue of how much Board Members should be paid is not just about the number of hours they work.

This Board, and this government, have committed to striving for equity in the making and implementing of policies. I believe it is appropriate to also strive for equity in access to the County Board. I believe that every Arlingtonian would agree that this Board should reflect our community in all its diversity.

I think Arlington deserves to have a variety of voices, viewpoints, income levels and socio-economic backgrounds represented on this Board. And I believe we have a better chance of achieving that if serving on the Board is practical for those who are not independently wealthy or dependent upon a partner to be the primary breadwinner.