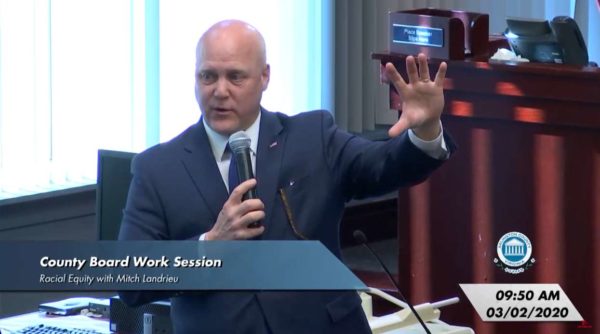 In a special work session with the Arlington County Board, former New Orleans Mayor Mitch Landrieu told the board that achieving racial equity will involve restructuring the budget.

The former mayor spoke to the County Board at a work session yesterday morning (Monday) as the County’s budget process kicks into high gear.

Landrieu, author of In the Shadow of Statues: A White Southerner Confronts History, spoke briefly about the history of racism in America. He said changes had to go beyond just removing Confederate names from streets and schools, or taking statues down and calling it a day. He said southern localities need to do more to address the roots of institutionalized racism.

“I understand Elizabeth Warren and Bernie [Sanders] are mad at the people who have [wealth], but it’s not just the institutions today that created the wealth gap between African Americans and white people,” Landrieu said. “Those discrepancies have been baked in over time.”

Landrieu was in Arlington at the invitation of the County Board, which is embarking on a year-long push to continue building equity into its budgetary and policy decision-making.

“The more you get into it and look at things, it’s clear there’s more we need to do to ensure equity and that the government’s working for everyone,” Arlington County Board Chair Libby Garvey told ARLnow, prior to the meeting. “Arlington reached out to Mitch, after seeing some of the work he did… it’s part of the budget process. We’re trying to infuse equity into all of our budget discussions.”

Much of the discussion was generalized, with Landrieu noting that he didn’t know how some of the specific mechanisms functioned within Arlington, and County Board members admitting they hadn’t read Landrieu’s book.

Landrieu noted that it was going to take considerable effort to rebalance after generations of families building generational wealth under an unequal system. Part of the solution, he said, is focusing on equity rather than equality in public services — a concept previously endorsed at the County Board.

“Budgets reflect whether you mean what you say,” Landrieu said. “[It shows] who pays and who gets what — that’s critically important.”

Two of Landrieu’s colleagues told the County Board that part of the process is going to various department heads to educate them and work on restructuring the budgets within the department. Changes included adding documentation in multiple languages, making accessibility improvements for people who were visually impaired, and holding meetings in places more accessible to public transit.

“You have to say ‘show me how we’re using the funding to close the gap’ and bake that into the way we do the budget,” Landrieu said. “When department heads know that, the budgets look vastly different.”

Landrieu’s staff noted, however, that as Arlington continues to grow it needs to look at how that growth is managed to ensure it doesn’t negatively impact vulnerable communities.

“You’ve given me comfort that despite the fact that our equity initiatives are in their infancy, that’s where we need to be in our early stages if we’re going to institutionalize this and not have it be just a periodic occurrence,” County Board member Christian Dorsey said. “You’ve given us practical advice for taking it to the next level in the months to come.”

“Should be more than just removal of library fines,” as called for in the County Manager’s proposed budget, Garvey said. “Each department should have something… I expect to see a lot more items going forward.”

“It’s all about good government,” Garvey added. “It helps government work better for everyone, not just a certain group.”