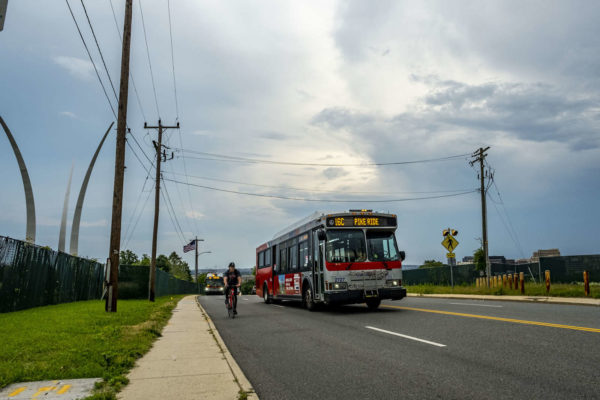 Pike Housing Proposal Delayed Amid Outcry — “Faced with criticism on multiple fronts, Arlington County Board members on June 16 essentially threw a staff proposal under the bus, delaying for three months consideration of a controversial plan on how to prioritize affordable housing in the Columbia Pike corridor… It would have increased the maximum threshold, from the current 60 percent of area median income to up to as much as 100 percent, for individuals to qualify for assistance in buying properties.” [InsideNova]

River Rescues Near Chain Bridge Saturday — “D.C. firefighters and police officers on Saturday rescued eight adults and four children who became trapped on rocks in the Potomac River and were cut off from shore by rapidly rising waters in a sudden rainstorm.” [Washington Post, Twitter]

ACPD Investigating Brandishing Incident — “On June 21, police were dispatched to the report of a brandishing. Upon arrival, it was determined that the victim was driving in the area of 31st Street S. and S. Abingdon Street when he was allegedly cut off by the suspect. The suspect then waved the victim in front of him and began following him. When the victim parked, the suspect pulled alongside his vehicle and a verbal dispute ensued, during which the suspect brandished a firearm.” [Arlington County]

Traffic Getting Back to Normal — “Car and truck volume trends in Virginia are moving back toward normal after plummeting during the COVID-19 shutdown, according to numbers released Friday by the Virginia Department of Transportation. Pandemic traffic on state-maintained interstates and primary roads hit a low on April 12, a Sunday… The numbers have gradually rebounded since, climbing back to around 20 percent below normal by the end of May.” [Virginia Mercury]