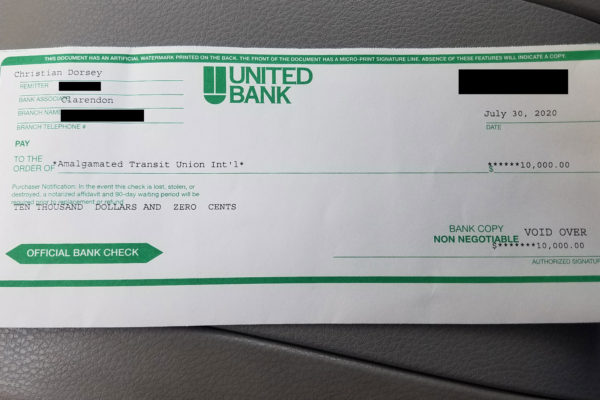 Fulfilling a long-delayed promise, Arlington County Board member Christian Dorsey dropped off a cashier’s check for $10,000 to the headquarters of the Amalgamated Transit Union International yesterday.

The action is, one would assume, the last chapter in the saga of a political donation that caused Dorsey to lose his seat on the WMATA Board and lose the trust of some of his constituents in Arlington.

Dorsey was ordered by the WMATA Board to return the $10,000 political donation to his Christian Dorsey for County Board political committee due to a conflict of interest — between his role in helping to run the transit agency and his acceptance of a donation from its largest labor union. He also faced ethics scrutiny for not disclosing the donation for four months.

Dorsey resigned from the WMATA Board in February after failing to return the donation; at the time, he did not have sufficient funds in his campaign account to do so. Most of Dorsey’s campaign cash in 2019 went to himself and his wife, in the form of loan repayments and payments for campaign services, respectively.

Dorsey filed for personal bankruptcy in October 2019. The bankruptcy case was still active in federal court as of last week.

Friends helped to raise additional campaign funds for Dorsey in February and March, despite him not being up for reelection until 2023. In addition to donations from fellow elected officials and from individuals, Dorsey accepted $1,000 from the Northern Virginia Association of Realtors and $2,000 from Steamfitters Local Union #602.

Dorsey wrote a $10,000 check dated Feb. 24, 2020 and sent it to ATU International but, according to reporting by the Washington Post last week, the check was somehow lost when it was sent from the union to the bank.

In response to subsequent inquiries from ARLnow, Dorsey said on Thursday that he had dropped off a cashier’s check drawn from his campaign account. He provided a photo of the check, and ATU International spokesman David Roscow confirmed that it had been received.

“I’d like for this saga to be closed as well, and will cooperate as necessary to do so,” Dorsey told ARLnow earlier in the week, though he added that he saw it as closed “at least as it pertains to my responsibility in the matter.”

“My promise was to return the contribution, which I did, as evidenced through the certified mail receipt and acknowledgment by ATU in February/March,” he said. “That they didn’t process it is a matter I cannot speak to, nor can I reasonably be held responsible for.”

According to the Virginia Dept. of Elections website, Dorsey’s campaign initially submitted a campaign finance report on July 15 that did not include the February return of the donation. That report was amended on July 19, to include the $10,000 check as an expenditure. The Post reported on July 23 that the check was never cashed.