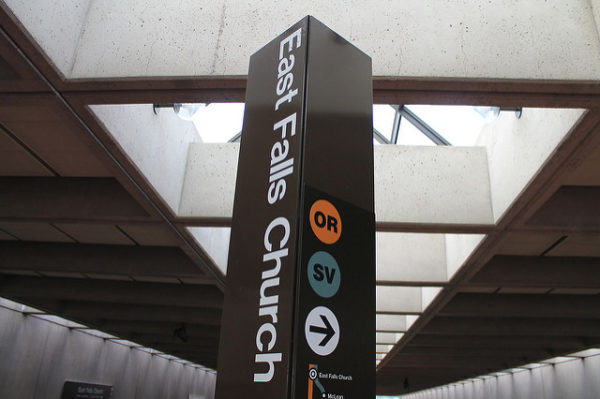 The transit agency announced that its planned outdoor platform reconstruction work along the Orange Line is “well ahead of schedule,” allowing East Falls Church and other stations to return to service.

The East Falls Church station will reopen Sunday, according to WMATA. It closed in March, at the outset of the pandemic, along with the Clarendon and Virginia Square stations — which reopened in June.

The Arlington Cemetery station is also set to reopen on Sunday, as Metro works to return rail service to pre-pandemic levels.

Also available to East Falls Church commuters: a new bike parking facility at the station, which cost around $2 million and was originally slated to be completed in 2015. Cyclists need to register online before using the “Bike and Ride” facility.

More on the reopenings from a WMATA press release:

With the project to reconstruct outdoor platforms at four Orange Line stations west of Ballston proceeding well ahead of schedule, Metro today announced that East Falls Church will reopen this Sunday, August 23. The early reopening of East Falls Church will follow yesterday’s ahead-of-schedule reopening of West Falls Church and the five Silver Line stations in Virginia. Rail service has returned to near pre-pandemic levels, and Metrobus service will increase dramatically beginning Sunday, August 23.

Also today, Metro announced that Arlington Cemetery Station, closed since March due to the Covid-19 pandemic, will also reopen on Sunday, leaving only two of Metrorail’s 91 stations – Vienna and Dunn Loring – that will remain closed for a few additional weeks.

Dunn Loring and Vienna will open Tuesday, September 8, marking the first time all Metrorail stations have been open since March 19 when Metro initiated strategic station and entrance closures as part of its comprehensive response to the public health emergency.

Returning Orange Line customers may notice ongoing construction activity even after stations reopen, as Metro’s commitment is to restore service on the first day it is safe for customers, which is often weeks earlier than a project’s completion date.

East Falls Church Station customers will benefit from the station’s new secure Bike & Ride facility that offers secured bicycle parking at no charge. To access the facility, customers must use a registered SmarTrip card and must first complete the online Bike & Ride registration form, available here.