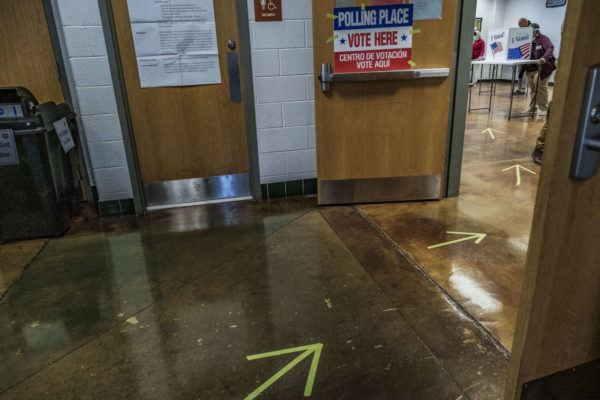 Polls Are Open — After a record-setting run-up to the 2020 presidential election, it’s Election Day and polls are now open. Polling places in Arlington are open until 7 p.m. County government is closed today so metered parking will not be enforced. There are two local races: Audrey Clement (I) challenging incumbent Libby Garvey (D) for Arlington County Board, and Cristina Diaz-Torres, David Priddy and Symone Walker vying for two open Schools Board seats. [Arlington County]

Other Races on the Ballot — Two of Arlington’s members of Congress — Democrats Rep. Don Beyer and Sen. Mark Warner — are facing Republican challengers: Jeff Jordan and, in the Senate race, Daniel Gade. Both Jordan and Gade are retired Army officers. Also on the ballot are a pair of proposed changes to the Virginia constitution, and five county bond referenda, including one facing some organized opposition. [Arlington County]

Changes to Potomac Yard Development — “Six months after pivoting from office to residential, ZMA Development is aiming to go slightly smaller at Potomac Yard. The latest plans filed with Arlington County have reduced the number of residential units from 620 to 488 units planned at the Landbay C-East site at Potomac Avenue between 29th and 33rd Streets S (map). The two-phase development, now dubbed Hazel National Landing, also has added a 50 foot-wide ‘pedestrian passageway.'” [UrbanTurf]

Marymount Adding Softball — “Dr. Irma Becerra, President of Marymount University, has announced the addition of softball as a varsity sport, with competition set to begin during the Spring 2022 semester.” [Press Release]

New Public Access TV Series — “Months after their senior year in high school did a 180 degree turn from what they envisioned nearly a year ago for senior year rites, a group of students from Arlington launched the Gen Z Diaries: Senior Edition.” [Press Release]

Nearby: A Woke Retirement Home — Residents of the Goodwin House senior living community in Bailey’s Crossroads, home to a number of former Arlingtonians who were engaged in civic activism, have been busy getting out the vote and supporting the Black Lives Matter movement during the pandemic. [Washingtonian]

END_OF_DOCUMENT_TOKEN_TO_BE_REPLACED

More Stories
JUST IN: No Return to Classrooms in 2020 for Most APS StudentsVoting Underway in Arlington County