This Saturday, the Arlington County Board is slated to review a proposal to convert garden-style apartments on Columbia Pike into a 400-unit development dubbed Pike West.

In the first of two phases of the project, local developer Merion Group plans to demolish 14 of the apartment buildings, or 90 units, and build two 6-story apartment buildings and a shared, above-ground parking garage with 418 spaces and topped with a green space. The other 27 units and accompanying 20 parking spaces will remain in this phase. 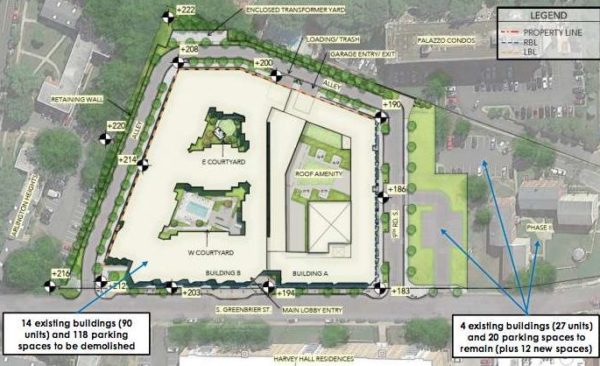 The developer asked to remove two planned neighborhood streets, and instead turn them into alleys while relocating them within the Greenbrier property.

The new apartment buildings will set aside either 93 or 124 units for people making up to 60% of the average middle income.

“In either event, you will have more units that are affordable than that are out there on the site today,” said Catharine Puskar, an attorney for the developer.

The developer met with the community on Sept. 22 and with impacted tenants on Oct. 29, Puskar said. Tenants will get a requisite 120-day notice of the project next year ahead of construction.

Until then, “they are welcome, and we would like them, to stay inside their units,” she said.

Columbia Pike was the site of a recent affordable housing scuffle between Arlington residents and the County Board. Last month, the County Board voted to shelve a proposal from county staff to change rules governing affordable condos and other for-sale housing along Columbia Pike, InsideNova reported. Critics were vocal in their disapproval of the plan when it first came before the board in June and again in October.

But this project carries less controversy, according to some planning and transportation commission members, who mostly voiced approval of the plans during recent meetings. There is, however, some community opposition, from a group that’s generally skeptical of new development.

Representing Arlingtonians for Our Sustainable Future, economist Jonathan Huntley told the Planning Commission that the group has estimated the development will require up to $23 million in funding to meet new residents’ and students’ needs in the coming years.

The units feed into schools that are already crowded, he said.

“Ultimately, this development will require Arlington to make a fiscal commitment to meet the needs of new residents,” said Huntley. “We predict Pike West will attract more students and generate lower than average real-estate revenues, both of which will lead to deficits.”