County staff are accepting public comments on some long-awaited safety improvements at three intersections along the Bluemont Junction trail.

Residents will be asked if the proposed changes would make them feel safe using the trail or driving across it. The engagement period is open through Friday, Nov. 20.

For years, users have said conditions are unsafe along the trail, which connects Ballston with the Washington and Old Dominion trail at Bluemont Park. It’s difficult for trail users and drivers to see one another at the intersections, until the former are already in the crosswalk.

Discussions and presentations on upgrades began last winter, but staff had to pause their progress this spring due to the pandemic. Work resumed this fall.

“Trail safety and access issues for the Bluemont Junction trail were first raised by the community in 2013,” the county project page said. “The project has evolved to focus on the three intersections included based on site visits, data analysis, and community input.” 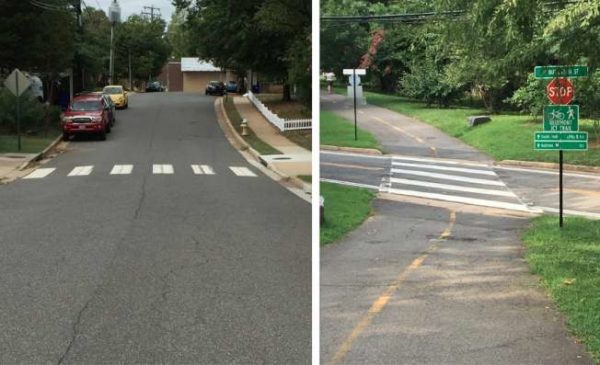 The Bluemont Civic Association, the Bicycle Advisory Committee and Pedestrian Advisory Committee provided input on the preliminary designs. The public comment period through Nov. 20 will inform the design plans that county staff will present to stakeholders for more comments once they are 30% complete.

“This project was identified as necessary to improve safety and accessibility at intersections where the trail and the street network meet,” the county staff project page said. “It will benefit people walking, biking, accessing transit, and driving.”

Where the trail intersects with N. Buchanan Street and N. Emerson Street, the trail and road are at different elevations and visibility is low, the survey said.

Although the trail is typically more heavily used than the roads, signs are limited and the street markings are worn out.

At N. Emerson Street, county staff propose raising the crossing, changing the angle of the approach to the trial and adding signs.

Sightlines at the N. Kensington Street intersection are limited and nearby transit stops are not ADA accessible, the survey said.