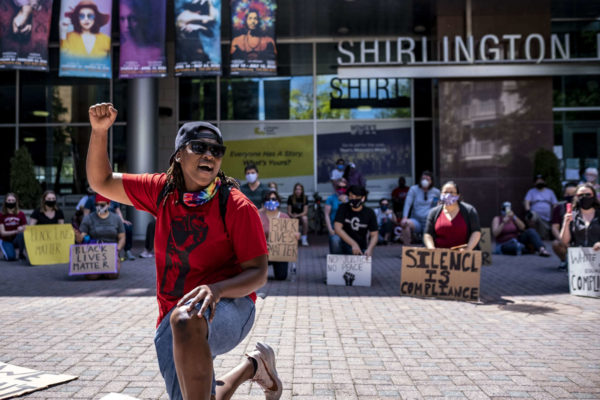 (Updated at 10:30 a.m. on 12/02/20) Arlington is seeking diverse voices in its Dialogues on Race and Equity, but so far the biggest group of respondents have been middle-aged white women who are relatively affluent.

Arlington County Chief Race and Equity Officer Samia Byrd and Challenging Racism Director Alicia Jones McLeod, who are promoting a new questionnaire on the topic of race, see this as a sign to keep pushing for broader participation.

“It has been interesting… we are seeing predominantly white women, middle aged, homeowners completing the assessment,” Byrd told the County Board last week. “So we really, really want to encourage everyone — so we can hear all of the voices that we typically do not hear — to complete the assessment.”

Women represent 60% of respondents, and men 31%, with 8% preferring not to answer, and less than 1% marking gender non-conforming or not listed.

“We want to understand the full Arlington experience, or Arlington as experienced by everyone, so that we can continue to move forward,” Byrd added, in a conversation with ARLnow yesterday.

On Monday, the assessment was released in Mongolian and Arabic. It is being pushed via social media, email and the distribution of hard copies. The assessment closes on Dec. 31 and results will be presented to the County Board in the new year.

About 1,200 assessments have been completed since the survey went online on Oct. 12, as part of a broader initiative from Arlington County and Challenging Racism to engage community members in dialogues on race and equity, in the wake of the police killing of George Floyd and the protests that followed.

More than 200 people have participated in a second component of this initiative — a series of six conversations — the last of which is set for Dec. 9.

The preliminary under-representation of people of color, immigrants and non-English speakers mirrors the feelings that participants have expressed about the Arlington Way, housing and Arlington Public Schools. Participants have frequently mentioned barriers that lead to under-representation in government processes, home-owning and APS gifted programs.

Byrd said the assessments and discussions will lay the foundation for her work with county officials and the community to dismantle systemic racism, where it exists, in Arlington County.

That work involves undoing the lasting effects from when unequal treatment was codified in law, Byrd said. While those historic policies no longer exist, they erected barriers that keep Arlingtonians from accessing housing, education, health and wealth to this day, she said.

“None of us here created the system, but we’re all a part of it, regardless,” she said. “Race is the center of it.”

In the assessments and conversations, many Arlingtonians identified the Arlington Way — a catch-all phrase for citizen engagement in local government — as an area where the means of participation disadvantage people of color, those who rent and those who do not have the luxury of time to participate in lengthy, iterative decision processes.

“The Arlington Way means different things to different people, but generally it is about engagement: how people interact with, and who has access to, decision-making, decision-makers and resources; who is at the table when those policy decisions are being made; who can weigh in when policy decisions are being made that affect everyone,” Byrd said.

The sentiment is not new: For years, there have been suggestions to retool, reform or scrap the process entirely, in favor of a different system of gathering community input.

The pandemic has, at least temporarily, resulted in one notable change to the Arlington Way: more public meetings are being conducted online, rather than in person, thus making it more feasible for some to watch or participate. Before, participation in in-person meetings might have required some combination of booking a babysitter, requesting to work a different shift, waiting for public transit, and sitting in a crowded room for hours on end.

As for the two other themes, housing comes up because the topic is facilitated by conversation moderators, who show the Race and Housing video from the Alliance for Housing Solutions. The conversation on Arlington Public Schools, however, is spontaneous and recurring.

As is the case in many large school systems, McLeod said she has heard participants mention continued segregation in the public school system based on where the highest concentration of white families and PTA resources, are: North Arlington. Others said they feel that not all kids have the same level of access to gifted programs.

Still, there are not many solutions available, although redistricting is a hot topic, McLeod said. Next year, she plans to facilitate conversations on education and race, using Nice White Parents, a serial podcast from the New York Times, as a guide.

“This is a community assessment: We’re trying to figure out what’s best for the community at-large and where do we go next,” she said.

Those next steps are recognizing and dismantling the systems that make it difficult for Black and brown people to navigate public life in Arlington, but are invisible to white people, said McLeod.

“The Arlington Way is a great example: If it works for your schedule, you might not notice that this is a barrier, but once you notice it, you can never not see it,” she said. “We want them to see that this might be invisible, but once we see it, we can never go back.”

Read more →
More Stories
Rosslyn BID to Kick Off Season of Giving with a Winter Clothing DriveListing of the Day: 5139 15th Street N.