(Updated at 9:45 a.m.) Developer JBG Smith is making changes to plans it had for two courtyard eateries on Crystal Drive.

In 2018 the County Board approved a plan for two restaurants for the green space at 2121 Crystal Drive, which currently has walking paths, trees, a field, a lighted gazebo and seating. JBG Smith is returning to the County Board with a new plan that would combine the two eateries into one larger restaurant.

The current submission for a 5,640 square-foot space, dubbed “Dining in the Park,” reflects improvements made in response to feedback from potential restaurant operators, Taylor Lawch, Vice President of Development, said in a statement.

“We are excited about our proposal to further activate Crystal Drive and an adjacent public plaza with full service food and beverage,” Lawch said.

The County Board is expected to review the amended proposal on Dec. 12.

“We look forward to continuing to work collaboratively with the County and the community to advance our collective vision for National Landing as a vibrant 18-hour neighborhood,” he said. 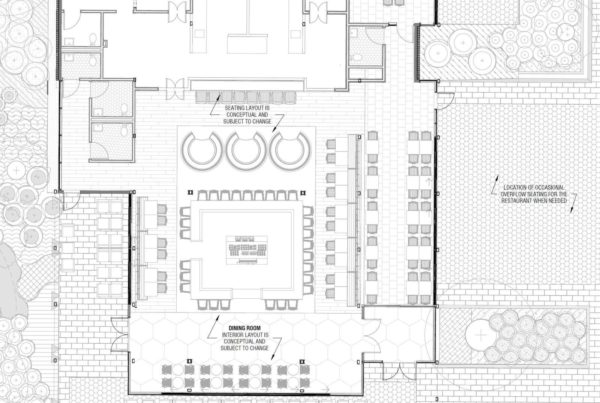 JBG Smith has proposed a slate of new development in the Crystal City area as Amazon settles into its HQ2. Even before the HQ2 announcement, however, the company was looking for a way to activate the 2121 Crystal Drive courtyard, nestled among office buildings and occasionally used for events like Crystal City’s 5K Fridays.

In 2018, the County Board approved a site plan amendment to permit the construction of the two restaurants. In the first draft of the plan, the developer envisioned two restaurants: “one that resembles a greenhouse and one that calls to mind a tree house,” the Washington Business Journal reported.

Changes to the plan were on the the June County Board meeting agenda earlier this year, but staff recommended deferring the approval of the project while JBG Smith worked to amend it.

The Board is now slated to hear the site plan plan amendment at its Saturday meeting next week.