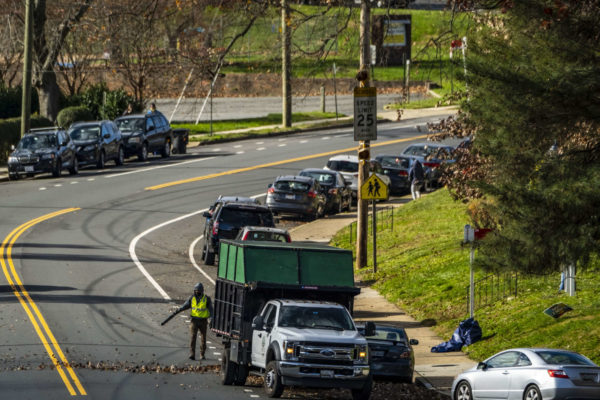 Day Laborer Site Now Closed — “Although not unexpected, mid-November nonetheless brought something of an end of an era to the Shirlington Employment and Education Center, better known as SEEC. The pavilion area in Shirlington that the organization had used since 2003 to connect day-laborers with contractors and homeowners who sought their services has been fenced off in preparation for changes to Jennie Dean Park, where it is located.” [InsideNova]

Tonight: Outdoor Art in Crystal City — “Walk along Crystal Drive on December 2nd from 6-9PM to see the words of Luisa A. Igloria, Poet Laureate of the Commonwealth of Virginia projected onto the facade of 2011 Crystal Drive as the opening installation of Arlington Art’s Visual Verse. Their work will be brought to life by noted artist Robin Bell.” [National Landing BID]

Beyer Blasts Proposed Metro Cuts — From Rep. Don Beyer (D-Va.): “The proposed WMATA budget cuts would be apocalyptic for Metro service and devastate its workforce. This catastrophe must not be allowed to happen, and Congress can prevent it by passing a new aid package. WMATA is not alone in its massive funding shortfall, which is a direct result of the pandemic. Cuts like this will hit across the country without robust aid for state and local governments and specific targeted funding for transit.” [Press Release]

ABC Store Coming to Pentagon Row — “It’s official: you will be able to buy booze in the former local Bloomberg campaign office in Pentagon City.” [Twitter]

Library Director’s Xmas Playlist — “For the past 13 years, I have published a ‘Too Cool for Yule’ playlist, as my love letter to the County and the people we serve. And while (sadly) Spotify has replaced the cassette tape, making the process easier, like much of 2020, this playlist was more difficult than ever to create.” [Arlington Public Library]