The second of two residential towers at Pentagon Centre, in Pentagon City, is taking shape at 15th Street S. and S. Hayes Street.

The Milton is set to be completed in 2023, said Geoffrey Glazer, the Senior Vice President for National Development of Kimco Realty, owner of the shopping center.

The County Board approved the buildings in 2015 as part of Kimco’s three-phase, 30-year development of Pentagon Centre. Phase one began with a parking garage near Costco. The project also includes a 9,000-square foot open space, according to a staff report.

Construction crews worked from spring to fall relocating utility lines for the new building, and the project is still on-schedule, Glazer said. Right now, they are doing preliminary foundation work and will eventually start digging.

“We’re very close to where we were [supposed to be] when we started that project,” he said. “We worked through most of the pandemic, and construction on the site work all kept moving forward.”

He does not anticipate the construction causing any disruptions to shopping at Costco, Nordstrom Rack or Marshalls.

“Access to our existing parking structures and fields will all be open and operational,” he said. “There will be additional signage for people to have clarity for how to move around.”

In later phases, scheduled out about two decades, leases will be up for the big-box stores, making way for public open space and new development.

Meanwhile, Chick-fil-A and a Chase Bank branch are moving into the ground floor of The Witmer, joining Arlington’s second outpost of Wiseguy Pizza. The local D.C. pizza chain opened the Pentagon location in June.

Ultimately, as currently configured, the site will have 346,000 square feet of retail, 705,000 square feet of office space and a 200-room hotel. With the residential buildings, that brings the total project size to nearly 2 million square feet, according to Kimco. 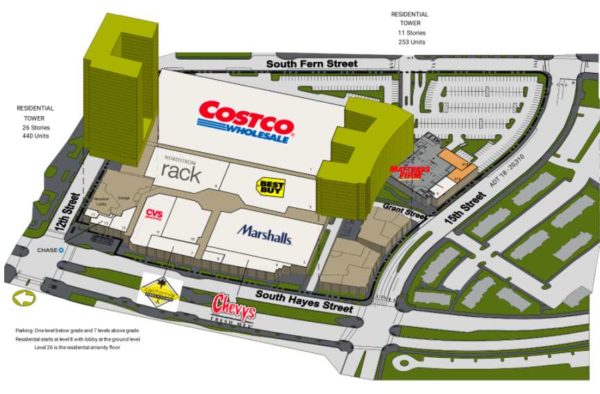