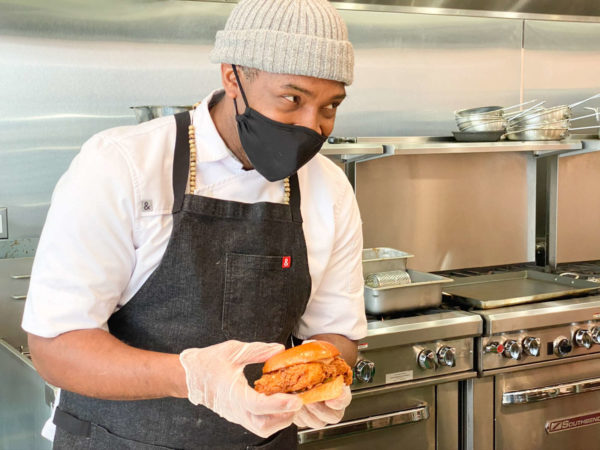 But it hasn’t altered how the chef does business.

“It hasn’t changed anything other than we’ve been blessed with more customers from a wider range of audiences,” Harper tells ARLnow. “We just have been busier.”

In early December, Queen Mother’s moved into the restaurant incubator Cafe by La Cocina at 918 S. Lincoln Street, right off of Columbia Pike, in the Alcova Heights neighborhood.

As sides, there are seasoned waffle fries and two different kinds of coleslaw. Homemade sweet tea and lemonade are offered as drinks. For desert, brown butter chocolate chip cookies.

Harper first got attention as the season three winner of the Fox competition show Hell’s Kitchen. He’s been an executive chef at Las Vegas and D.C. restaurants, an author, a podcast host, and has made numerous return trips to television. He also previously collaborated with another restaurateur on the short-lived, sausage-and-beer restaurant Fat Shorty’s in Clarendon.

Queen Mother’s is Harper’s first go at a restaurant he owns and controls himself. It was previously based at a virtual food hall in D.C. before making the move across the river.

“I’m from Alexandria… I’m a Virginia guy,” he says. “I’ve always wanted to ‘restaurant’ on this side of a bridge, so to speak.”

Growing up a neighbor, he notes his familiarity of Arlington and how he’s continuously overwhelmed with the support the community has provided Queen Mother’s.

“You know, people saying ‘Hey, we’re glad you’re here’ and ‘We need more things like this in the neighborhood, right down the Pike,'” he said.

The restaurant is named after his mom, Carol Harper.

“She’s affectionately known as a mother to her children… and to most of the people in my neighborhood,” he says. “And she’s a queen.”

Harper says he also named it as such to shift the conversation around Black food and Black women.

“Instead of going down the road that we’ve gone down in years past with the negative or stereotypical names, it’s my responsibility to put positive energy towards our culture and food,” Harper says. “And fried chicken is what I’m using.”

Recently, there’s been a movement around reclaiming chicken as a symbol of pride in the Black restaurant community.

Harper set up shop at the Columbia Pike-based incubator Cafe by La Cocina because the barrier for entry was significantly lower than taking on his own brick and mortar, particularly in the midst of a pandemic.

“One of the barriers to opening up a restaurant is all of the money, infrastructure, and access,” he says.”With these shared spaces, [the incubator’s owners] assume a bunch of the risk.”

It’s a win-win for the incubator as well, being able to offer a number of different concepts in the same space, he says.

There are challenges and drawbacks, Harper admits. It’s not a dedicated space, he and his employees need to be mindful of others working around them, and not all decisions fall into his hands.

He cites setting up the patio for outdoor seating as an example, saying he would love to have done it this week with the mild temperatures but the incubator makes that decision.

But for him, the collaboration with others makes it all worth it.

“I get to learn from La Cocina and the other chefs and tenants that are there. That’s the biggest thing,” Harper says.

As for the future of Queen Mother’s, Harper says the plan is to open his own space “in due time” but that doesn’t mean he’ll abandon the incubator or the idea of shared spaces.

“I’m a firm believer in collectivism and we are stronger together… it’s important to stay attached to the community,” he says.

Harper notes when that time does come to get his own brick and mortar, it may not have to be a choice “‘either or,’ but a choice of ‘and both’ for us.”

Either way, Queen Mother’s and its very popular fried chicken sandwiches appear to be here to stay.