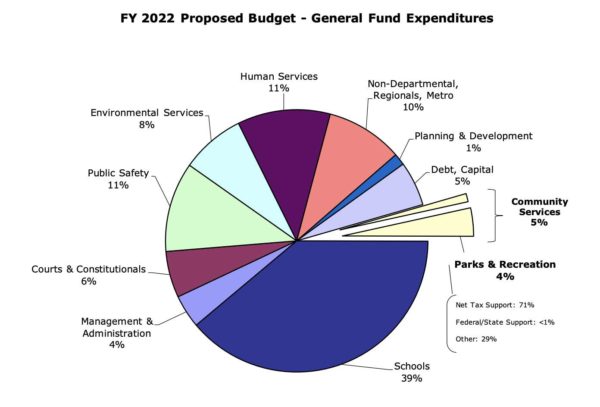 With budget planning in full swing and tax season looming near, you may be wondering what Arlington County is paying for with your tax dollars.

County officials are currently hammering out the details for the next fiscal year’s budget, which the County Board is slated to adopt on Saturday, April 17 and which will go into effect on July 1. The proposed $1.36 billion budget, which County Manager Mark Schwartz calls a “transition” budget, includes a COVID-19 contingency fund and $16.4 million in cuts.

And while the pandemic forced some revisions to the current 2020-21 budget, the pandemic has not changed the different buckets of spending by the county — from Arlington Public Schools to the Department of Parks and Recreation — and what proportion of the general fund these sectors receive.

In this year’s budget, about $795 million comes from real estate taxes. Levied on homes as well as apartments and commercial properties, these taxes make up the lion’s share (59%) of general fund revenue.

This year, homeowners should expect to see their bills increasing due to rising property values, although Schwartz is proposing keeping the $1.013 per $100 property tax rate flat, as he did last year. Real estate assessments showed an overall growth of 2.2% with an increase among residential properties of 5.6% and a 1.4% decline in commercial assessments. 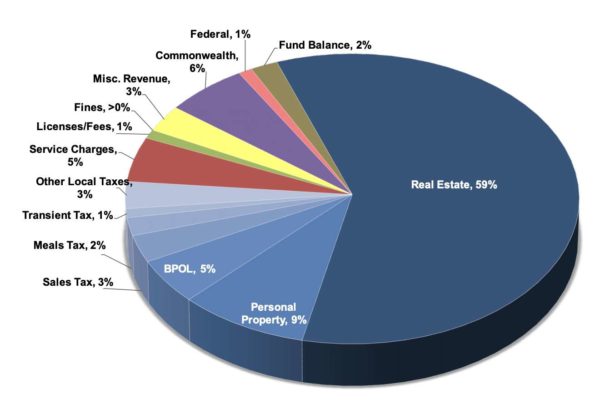 Other revenue sources are utility rates for water and sewage; fees, like those set by the parks department; permits and fines; state and federal contributions; and some leftover money after previous budget cycles.

Where does the money go?

The county’s general fund expenditures are divided into three large buckets: county services, schools and the capital fund. In the current budget, the county services bucket — which includes a $48 million contribution to Metro — accounts for $817 million. APS received $524.6 million from the general fund and the capital fund received $3.8 million (the rest comes from carryover balances and bonds).

In the current fiscal year, the school transfer covers about 78% of APS’s total expenses, the largest share of which, accounting for nearly 78%, goes to salary and benefits costs.

Excluding schools, of the nine overall departments or sectors receiving county funding, some are almost completely funded by local taxes, while others receive more support from federal and state support or other sources of revenue.

For example, taxes fund about 90% of the budget going toward public safety, which accounts for 11% of the county’s expenses. Within that, local tax support chips in $71 million of Arlington County Police Department’s $72 million budget.

On the other end of the spectrum, the Department of Environmental Services, with a budget of $109 million, only received half of its funding from local taxes.

Like Arlington Public Schools, many county departments, regardless of size, cite personnel as the biggest annual expense. Some examples of this include police and fire (~88%), the Department of Parks and Recreation (~70%), and the Department of Human Services (~54%).

And while the budget keeps growing each year, and tax contributions along with it, not every department is benefiting from increases. Police funding is poised to decrease by nearly $1 million in 2022, and other sectors seeing decreases in Schwartz’s proposed budget include county libraries and the Department of Public Safety Communications and Emergency Management.

After peaking in the 2019 fiscal year at nearly $38 million, tax support for Arlington Sheriff’s Office has been on a slight decline, reaching $35 million this year. It receives 22% of its budget from state and federal sources.

Some county departments have seen upticks in taxpayer support over the last two or three years.

One smaller-scale department that jumped up in expenses was the Office of the Electoral Board and Voter Registration, which had to hire additional coordinators for the presidential election and to handle absentee voting.

Taxpayers are also paying for additional personnel in the wake of Amazon’s anticipated arrival. The Department of Community Planning, Housing and Development and the Department of Environmental Services have each hired more staff to handle increases in workload for permitting, engineering and transportation work caused in part by Amazon’s HQ2 and the development it has spurred.