Last year started out as “a good budget year” for County Manager Mark Schwartz. But nearly a year after the pandemic hit Arlington, Schwartz’s new budget proposal is more austere.

Schwartz calls the upcoming Fiscal Year 2022 budget, which is being presented to the County Board Thursday afternoon, a “transition budget.” While modestly increasing spending, his proposal reflects big pandemic-era declines in some key revenue sources.

“This budget provides us a path forward, ensuring we have a strong, resilient County government when we emerge from this pandemic,” he said after a press briefing earlier today.

For starters, the proposed $1.36 billion budget — representing a 1.4% increase in spending — includes a $17.5 million coronavirus contingency fund. This will fund vaccine distribution and testing, eviction prevention, food assistance, and will go toward supporting local businesses.

Meanwhile, Schwartz has identified $16.4 million in cuts to help close what the county describes as a budget shortfall of $26 million, down from what was initially estimated last fall to be a $50 million shortfall. The rest will be made up through one-time funding sources, he said.

The bulk of the cuts come from eliminating 56 vacant positions, which resulted from a voluntary retirement package offered in January and a continuing hiring freeze from last year.

Schwartz proposes keeping the $1.013 per $100 property tax rate flat, as he did last year. Still, the average homeowner will see a tax bill that is 5-6% higher due to rising property values, Schwartz said. Commercial property assessments, by contrast, declined this year.

Homeowners will see an average increase of $29 in stormwater taxes, reflecting a rate hike of 1.3 to 1.7 cents per $100 in property value. The increase will help generate $15.1 million earmarked for stormwater improvements. Eventually, the county plans to eliminate the stormwater tax completely in favor of a fee based on how much impervious surface covers a given property, Schwartz said. 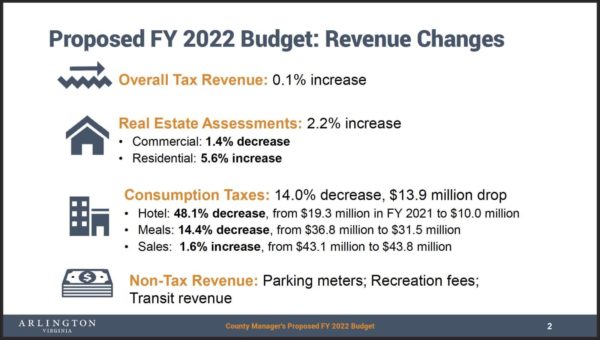 (Updated on 2/23/21) The pandemic has saved the county money through remote work and online services, which Schwartz said will help fund other programs and services. His budget includes a one-time, $500 bonus for county employees, who will be foregoing merit-based raises.

“Our employees have gone without raises — or a vacation day — for an entire year,” Schwartz said.

After the County Manager submits his proposed budget, the Arlington County Board will vote on an advertised tax rate this Saturday. The Board will be able to ultimately adopt a property tax rate equal to or less than, but not above, the advertised rate.

The Board will then review the budget proposal and conduct a series of work sessions with each county department beginning in March.

There will be two public hearings: Tuesday, April 6, and Thursday, April 8. The final vote on the FY 2022 operating budget is scheduled for Saturday, April 17.

Certain parts of the budget may be revisited, Schwartz said, should additional federal funding become available.

Other highlights from the budget proposal include:

“4.6% of the County’s operating budget is dedicated to housing and more than 15% is dedicated to safety net services and housing,” a slide from the budget presentation noted.

#ArlingtonVA officials are previewing the 2022 budget now, ahead of a full reveal Saturday.

Of note: the county contribution to its main affordable housing loan fund is getting halved, to $8 mil. Amazon, of course, is chipping in $20 mil on its own, but this is a notable change pic.twitter.com/xDrGoUbuDC