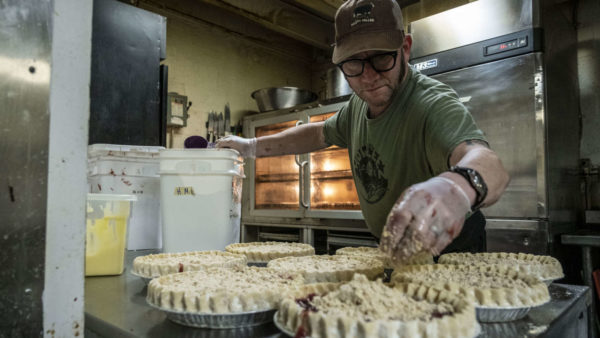 Pi Day was a very busy day for Acme Pie on Columbia Pike.

Pi Day is an annual celebration on March 14 of the mathematical mystery that is the ratio of a circle’s circumference to its diameter. The day also, of course, presents a great excuse to eat pie.

Schott said he made 98 large pies, 70 small pies, and had a “whole heck of alot of slices” and nearly sold out of all of it.

Sales, he says, “were in the same ballpark” as the Wednesday before Thanksgiving — aka the Super Bowl of pie sales — and definitely better than Pi Day last year.

“I think everybody was so sick and tired of being cooped up,” Schott says.

The most popular pie was a special one he made for the weekend, an English Banoffee pie.

“We use a graham cracker crumb crust with like a… chewy soft caramel toffee on the bottom,” says Schott. “Then, slices of banana, fresh whipped cream with a little bit of espresso, and then chocolate shavings on top.”

All 76 Banoffee pies sold out. He plans on making more for St. Patrick’s Day.

While Acme Pie started as a wholesaler baking pies in a basement, he opened his retail store at 2803 Columbia Pike two years ago in the spring of 2019. The shop took over the space from Twisted Vines Bar and Bottleshop.

Even before that Acme had presence in the community, selling pies at farmers markets, hailed for making popular vegan versions and helping other struggling local businesses.

This past July, Schott baked pies and hosted a fundraiser for his next-door neighbor Papillon Cycles, Arlington’s oldest bike shop.

He says the past year has also been “tricky” and “rough” for Acme Pie due to losing a large slice of his wholesale business.

“Wholesale is off huge. That’s pretty much the issue,” says Schott. “I went from selling [pies] to 70 restaurants to 10 during the pandemic,” due to many local restaurants cutting back or outright closing.

He’s optimistic sales will rise and normalcy will return in the coming months as the vaccine rollout continues. For the moment, he’s wishing that every weekend could be like the past one.

“It was amazing,” Schott says. “But you can’t have Pi Day everyday.”