A real estate company developing an apartment building in Crystal City is looking to “refresh” its holdings nearby with a new retail plaza.

Lowe Enterprises Real Estate, which owns 2450 Crystal Drive and 2641 S. Clark Street, has applied for a minor site plan amendment to help break up the “mega block” along Crystal Drive south of 23rd Street S. Where a low-slung building space is currently sandwiched between two taller office buildings, Lowe envisions a plaza and retail pavilion, according to application documents. 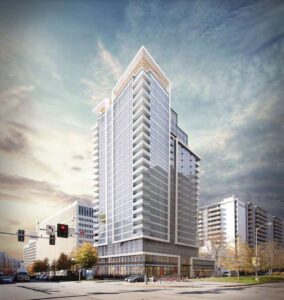 The application comes nearly four years after the Arlington County Board approved Lowe’s “Century Center Residential” development: a yet-to-be-built apartment building to go on top of the Buffalo Wild Wings at the corner of Crystal Drive and 23rd Street S.

Lowe is now proposing a 10,500-square-foot public plaza with ground-level retail improvements to take the place of a chunk of office space. This change “fulfills the ‘market’ public plaza” called for in the Crystal City Sector Plan, the applicant’s attorney, Kedrick Whitmore, told the county in a letter.

“The proposed changes would substantially enhance the existing condition of the area,” boosting the ability for outdoor gatherings and seating, Whitmore said.

The plaza would be an interim installation until the time when an east-west road between Crystal Drive and Clark-Bell Street can be built. For that to happen, however, additional buildings will need to be torn down, which requires some leases to expire.

Members of the public had the chance to engage with the site plan amendment last week as part of a new community engagement process, Arlington Dept. of Community Planning, Housing and Development spokeswoman Jessica Margarit tells ARLnow.

“For this subset, County Planning staff believe additional community input would be beneficial prior to consideration by the County Board,” she said. “While a majority are in fact minor, at times others can have a significant impact on the public realm or garner broad community interest.”

Examples of these minor plans with major impact include public park improvements or reconfigurations and substantial streetscape or road modifications, she said.

The focus on increasing community engagement for “minor” changes follows problems with a recent site plan amendment from JBG Smith to make changes to the Crystal City Water Park. The County Board initially denied its application in January over potential problems and approved the latest iteration of the project last month. During this process, members said this project revealed how technically minor site plan amendments can be major enough to warrant more public engagement.

Since then, the county has solicited public feedback on amendments to the Reed School Stormwater Facility, to Westpost (formerly Pentagon Row), and now, Century Center, Margarit said, adding that the feedback so far has been “overwhelmingly positive.”

“We are always looking for ways to iterate and improve upon our community engagement efforts,” she said. “In this case, we have implemented new virtual public meetings where the community can hear from both the applicant and staff, ask questions, and provide feedback.”

During a presentation on Thursday, representatives for Lowe said the goal is to introduce a break in the Crystal Drive “street wall,” making the buildings more pedestrian-friendly. The low-slung building that would be torn down currently serves as a connector building between two taller office buildings, Whitmore said.

The developer aims to save existing trees “where feasible” and make the area lush and biophilic, according to the Thursday presentation.

One potential challenge for the new retail plaza: a relative dearth of foot traffic south of 23rd Street S., particularly should offices not fully fill back up post-pandemic. A number of restaurants have closed at 2450 Crystal Drive over the past decade, after sluggish sales.

END_OF_DOCUMENT_TOKEN_TO_BE_REPLACED

More Stories
The Right Note: Are Your Taxes Too High?Just Reduced Properties in Arlington